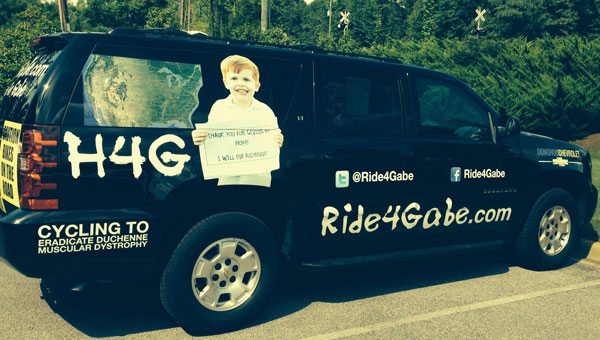 Retired Lt. Col. Glenn Nivens (U. S. Army) of Harpersville is on the ride of a lifetime. Nivens is part of the Ride4Gabe team that will travel more than 6,600 miles from Birmingham to Oregon to Mobile raise awareness and research funds for Duchenne muscular dystrophy, a rare genetic disorder that has affected 9-year-old Gabe Griffin, son of Scott and Traci Griffin of Shelby County. Without a cure, DMD is fatal.

The Griffins’ life mission is to help find a cure for DMD. At a visit to Con. Spencer Bachus to raise awareness of the disease, the Griffins met Michael Statley, Bachus’ chief of staff and avid bicyclist who wanted to personally help their cause.

Thus, Gabe’s gift of a lifetime was envisioned, a bicycle trip from Oregon to Alabama to bring public awareness of this little known but deadly disease to young boys.

Through months of planning, generous donations of SUV and a motorhome equipped with Wi-Fi, computers and GPS, orientation for the drivers, and training for the cyclists, the trip began June 23 from Alabama to Oregon and back to Alabama. The team consists of two cyclists, Statley and Wes Bates, RV driver Scott Griffin, SUV driver Nivens, documentarian and press assistant.

Nivens, age 74, rose from the ranks of private at age 17 to lieutenant colonel in the U. S. Army as an infantry commander. He is the founder and secretary of the Blue Star Salute Foundation, Inc. and SAR Cahaba-Coosa Chapter president.

“When I heard about the trip, I instantly wanted to go,” said Nivens. “This is the most worthy thing I have ever been volunteered for. My Father’s Day gift from my family was the ‘go ahead.’ My wife Linda is an invalid and my family promised to take care of home so I can go.

“I will drive this ‘Space Ship’ (motorhome and SUV) for some 70 days, chasing bicycles across the United States, all the way to Mobile, Ala. Ya’ll say a little prayer for the Team…including this old soldier!”