A 56-year-old Alabaster convenience store owner charged with selling synthetic drugs has been released from the Shelby County Jail on bonds totaling $45,000, and is scheduled to reappear in court later this month. 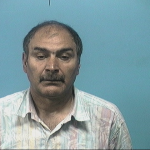 Hoover resident Ali Reza Samanifar posted the bond on June 24, which was several weeks after he was arrested on May 7 by the Shelby County Drug Enforcement Task Force, along with the Drug Enforcement Agency, the Alabama Law Enforcement Agency and Alcohol Beverage Control Board and charged with three felony counts of unlawful distribution of a controlled substance.

Officers arrested Samanifar at his Hoover residence and charged him with three counts of unlawful distribution of a controlled substance, and investigators executed a search warrant at his store after he was arrested.

The original bond reinstatement allowed Samanifar to post the $45,000 bond on the three 2014 unlawful distribution of a controlled substance charges. He is scheduled to appear in court again on July 23 at 8:30 a.m.

Play favorites in the Best of the Best contest

Who has the best pizza in the county? Let us know your favorites by voting in Shelby Living’s fourth annual... read more