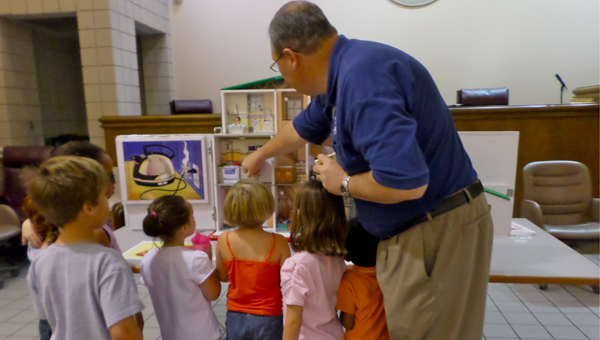 HELENA—Helena children learned about fire safety during a July 2 Visit with the Fire Department program hosted by the Jane B. Holmes Public Library.

Firefighters, including Deputy Fire Chief Peter Valenti and Fire Chief John Wilder explained common causes of fire, ways to prevent fires and what to do if there is a fire.

Valenti and Wilder used a grant-funded model house, complete with simulation smoke and working smoke detectors, as a teaching tool. With the help of the children, they pointed out common household fire hazards, such as a radio near a bathtub, overloaded electrical outlets and an unwatched pot on the stove.

Using the model house, children were also led through what to do if a fire should start. The first thing to do is “get out of the house,” but if unable to do so, Valenti instructed children to stay low and near a window.

“We have a ladder, we can reach that window,” Valenti said, adding firefighters may also come into the house to get rescue them, “bang on something, holler, scream, let the firemen know where you are.”

A firefighter in full gear demonstrated how firefighters stay low, crawling and using the walls in a house to navigate and locate anyone who may be trapped in a fire.

Children were also given the chance to explore the inside of a fire truck.

“They (the children) really like the truck and the simulation house,” Helena Library Director Daniel Dearing said. “The firemen are really good at explaining at a level they (the children) can understand…we welcome all ages so no one misses out on a chance to learn about fire safety.”

The Visit with the Fire Department was part of a series of free events offered each Wednesday as part of the Helena Library’s summer reading program. The next event will led by the McWane Science Center at 2 p.m. on July 9 at Helena’s City Hall.