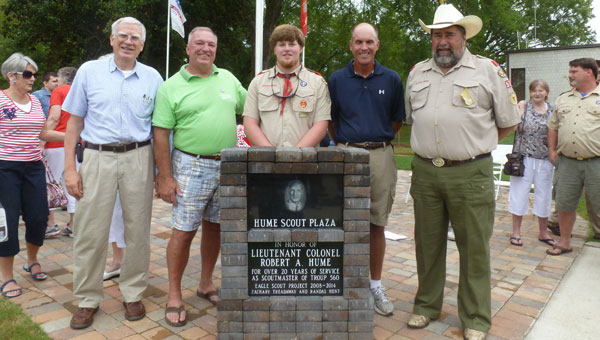 The Hume Scout Plaza was dedicated on Liberty Day, June 28, completing the Eagle Project of Troop 560 Eagle Candidate Randall Hunt. The community service project is the culmination of 1,600 man hours and tons of dirt, sod, pavers and materials. It is the third phase of Eagle projects spanning the last 22 years to beautify Columbiana City Hall. Eagles Paul Morris constructed the gazebo in 1992; Zachary Treadaway constructed the landscape berm left of City Hall in 1992; and Hunt completed Hume Plaza in 2014.

“Dad loved Columbiana and his scouts,” said David. “He would drive a van full of scouts when school got out in May and be gone 4-5 weeks driving out west, traveling to Canada, camping on the way, Thank you for honoring my father with this monument.”

“This project shows that we can do anything that we set out mind to and have a vision to complete,” said Columbiana Mayor Stancil Handley. “I have been a scoutmaster and have served many years on Eagle Boards. I have never seen an Eagle project this aggressive. We are so grateful to Randall and all the scouts for this first class asset to our city.”