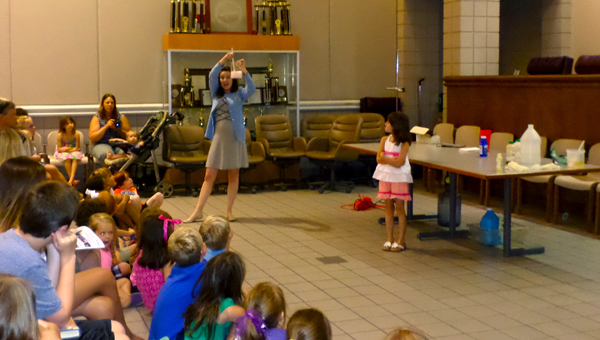 Kalli Mitchell from the McWane Science Center demonstrates how a base turns into an acid during a July 9 Radical Reactions program at Helena’s City Hall. (Reporter Photo / Molly Davidson)

HELENA—Helena kids made things “fizz, boom and change color” at City Hall on July 9 during a Radical Reactions program put on by the McWane Science Center and hosted by Helena’s Jane B. Holmes Public Library as part of the summer reading program.

Children learned about physical changes and polymers by creating “worms” using water, calcium chloride and “atomic worm glue,” experimented with combustion reactions with the “whoosh bottle” and using pressure to blow a cap off of a bottle, and watched a liquid change from pink to blue to orange as it went from a base to an acid.

“At the McWane Center we do science,” Mitchell told the children, explaining each experiment was not magic and the reactions had scientific explanations. She also stressed safety, reminding them “never to do any of this unless you have an adult with you.”

The McWane Science Center puts on nearly thirty programs each week during the summer and even more during the school year, and they do one annually for the Helena Library, Director Daniel Dearing said.

Mitchell echoed Dearing’s sentiment and said she hopes the Radical Reactions program inspires a curiosity and interest in science among the children.

“I hope it inspires the kids to go on their own and investigate something,” Mitchell said.

‘From the garden to the jar’: Pelham Public Library hosts canning program

The Pelham Public Library is teaming up with the Alabama Cooperative Extension System to offer a produce canning program on... read more