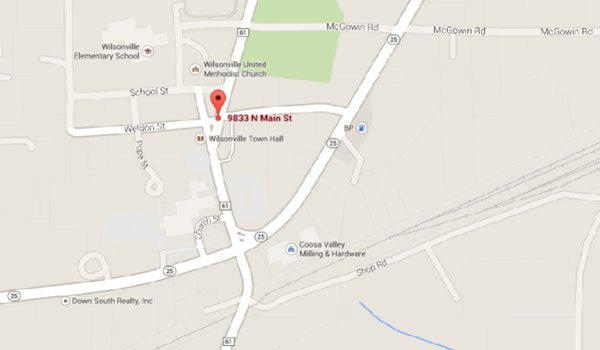 The Wilsonville location of SouthPoint Bank will be located at 9833 North Main Street. (Contributed)

WILSONVILLE—SouthPoint Bank is scheduled to open a branch in downtown Wilsonville this coming fall, according to a July 14 news release from the organization.

The Wilsonville branch will be the first SouthPoint Bank location in east Shelby County for the Birminhgam-based organization.

Mayor Lee McCarty, III, emphasized the important impact the bank will have for the area.

“Wilsonville had a bank, continuously in operation from 1958 until 2011. Our town has served as a commercial hub for a large portion of mostly rural, eastern Shebly County for many years,” McCarty said in a news release. “We were at risk of losing our commercial hub status without a bank. SouthPoint is the perfect fit for our community.”

SouthPoint Bank President and CEO J. Stephen Smith said SouthPoint is “excited” to be opening a branch in Wilsonville.

“SouthPoint Bank is excited to be moving into a town with such a true sense of community,” Smith said. “We will be staffing the bank with local bankers and plan to play a vital community role in Wilsonville.”