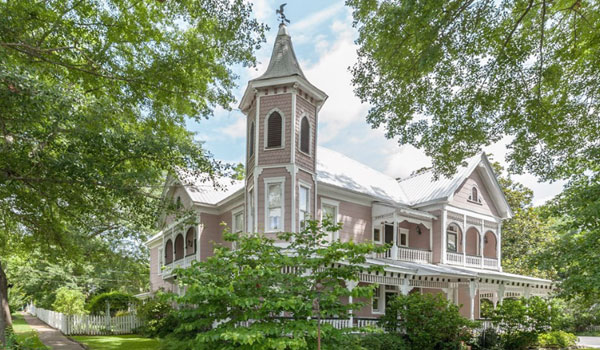 The McKibbon House sits on the corner of Shelby Street and East Boundary Street in Montevallo. (Contributed)

MONTEVALLO—Lyle Cunningham’s dusty rose-colored Victorian house, positioned on the sleepy intersection of Shelby Street and East Boundary Street in Montevallo, has seen a lot of history since ground broke on the home in 1900.

“If only these walls could talk, there’s a lot of life—a lot of life has gone on in this house,” Cunningham rued.

Robert Fulton McKibbon and his wife, Sara Warnock McKibbon, originally purchased the lot for $175 in March of 1900. Robert McKibbon owned, among other properties, a sawmill in town, which accounts for the heart-pine that lines the floors and deep walnut ceilings.

“I’m sure he was able to get all the wood he needed,” Cunningham said.

Over the years, six families owned the house before Cunningham purchased the property in 2005 after moving down South from California. Cunningham was looking for employment that would also allow her to stay at home with her son, and when she saw the home she knew it was the perfect fit.

“I looked all over Alabama at homes that were for sale, but when I walked through that front door I just thought, ‘This is it.’ I just knew this was the house,” Cunningham said.

Cunningham ran a bed and breakfast in the six bed, six and a half bath home for eight years before closing in 2013 when her part-time job as a bookkeeper and accountant for a law firm in Homewood turned into full-time employment, and Cunningham decided to put the house on the market.

Throughout her tenure as innkeeper, Cunningham hosted guests from as far away as Hong Kong, Europe and New Zealand. With experience as a cook on a racing sailboat and chef at a dude ranch, Cunningham’s hospitality background made her the ideal host, as evidenced by a guest book filled with glowing praises.

“It’s been a great experience, just a great experience. It’s a bittersweet thing if I do sell it. I will miss a lot of aspects of (running a bed and breakfast),” Cunningham said. “To me, Montevallo is kind of like Mayberry and I feel like I’ve turned into Aunt Bee.”

Cunningham will also miss the house—filled with unique touches such as intricate Victorian scrollwork and claw-foot tubs—and the amount of space it affords.

“It’s just so spacious. These high ceilings, the antiquity of it, and the way it’s built. You could never duplicate it,” Cunningham said. “It’s just a bygone era and it will never be this way again. It has been preserved and hopefully will be here for a long time.”

Montevallo Chamber of Commerce’s business after hours will be hosted at the McKibbon House on August 14. Local musician Jim Quakenbush will perform from 5 p.m. – 7 p.m.