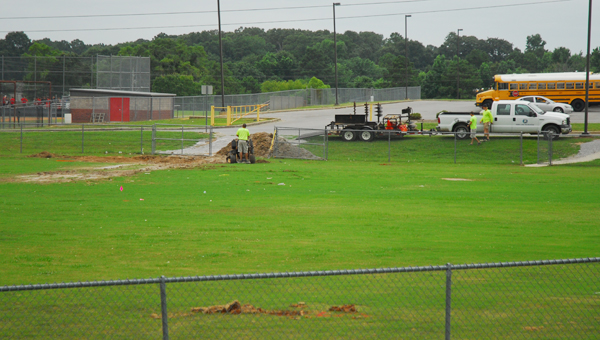 Heavy rains and vehicles caused extensive damage to a 3-acre field at Alabaster’s Municipal Park during the June 7 CityFest. The damage has since been repaired. (File)

ALABASTER – Crews have finished repairing a field damaged during the recent Alabaster CityFest event, and city officials said they will have the field ready for city league sports practices in mid-August.

During a June 23 meeting, the Alabaster City Council voted unanimously to pay the Specialty Turf and Supply company up to $112,000 to repair damage to a grass field at Municipal Park, and declared the repairs an emergency.

During CityFest on June 7, the event’s main stage, hospitality tent, main seating area and kids zone were set up on the field. Because heavy rains hit the area while crews were setting up on June 6 and tearing down after the festival the next day, vehicles caused ruts and other damage to the field.

The council voted to accept Specialty Turf and Supply’s low bid of $94,749.65 to repair the field, and also approved a $15,000 option to fund fertilization of the field and the installation of a French drain system.

In an Aug. 4 email, Alabaster City Manager George Henry said the repairs were completed on Aug. 1, and said crews were working to water and fertilize the lot before sports practices begin on Aug. 16.