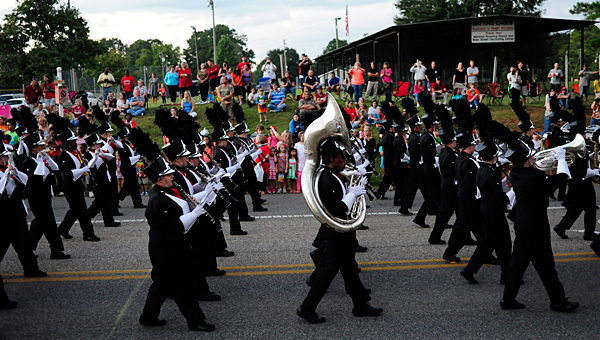 ALABASTER – The city of Alabaster will again partner with the city’s school system and area civic groups to turn the heart of the city into a sea of red, white and black during homecoming week.

Alabaster will host its second annual homecoming parade and celebration on Wednesday, Oct. 8, in the area surrounding Larry Simmons Stadium.

The parade, which will be themed “Warrior Pride” this year, will begin at 6 p.m. at Thompson Middle School, and will travel down Warrior Drive before turning right on Thompson Road. The parade will then turn left on Alabama 119 before ending in the Thompson Sixth Grade Center parking lot.

This year’s parade grand marshal will be the Alabaster City School System’s mascot and therapy dog, Warrior the Australian Shepherd, who will ride in the parade’s lead car.

After the parade, the community will hold a pep rally at Larry Simmons Stadium at 7:15 p.m. in preparation for the Thompson High School Warriors’ Oct. 10 football matchup with Hewitt-Trussville.

“This year, we would also like to extend a special invitation to our community churches,” ACS Student Services Coordinator Dorann Tanner wrote in an Aug. 15 email. “We have already spoken to a few community church leaders but if your church would like additional information, please have your church leader contact me (at Dorann.Tanner@alabastercityschools.org).”

This year will mark the first homecoming since the installation of a turf field and significant renovations to Larry Simmons Stadium, which are scheduled to be completed before the Warriors’ home opener against Hoover in September.