Shelby County cities among safest in the state 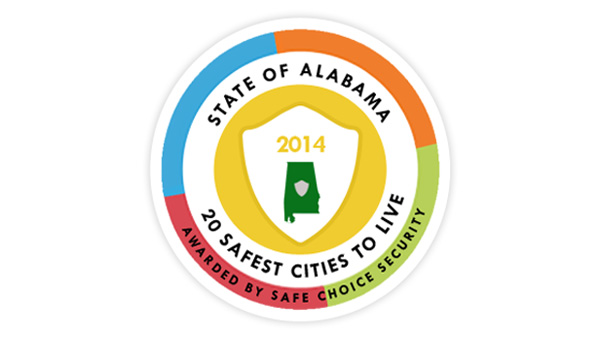 Four Shelby County cities were named to the recently released Safe Choice Security “Safest Cities in Alabama” list, with Helena coming in as the No. 1 safest city in the state. The list of 15 cities also included Alabaster, Calera and Hoover.

“Every state has certain cities that are more dangerous than others and while we hear a lot about those cities, we rarely hear about the ones that stand out because they are much safer than the average,” Safe Choice Security, a home and business security company, wrote in a blog posting about the “Safest Cities in Alabama” list. “We set about creating a listing to help you discover the safest places to live and work in Alabama.”

“With warning sirens to alert residents of tornados and a highly trained, competent police force, it’s no wonder Helena is such a safe city to reside in,” the “Safest Cities in Alabama” list said.

“Located in Shelby County, Alabaster is a diverse (city) with much to offer and a very low crime rate. It is also ideal for families,” the list stated.

“Low crime rates, an affluent small town feel and proximity to the big city all combine to make Calera an appealing city for relocation,” the list stated.

“Hoover’s cutting edge public safety initiatives are leading the nation, with investment in saving the environment while keeping residents safe,” the list said.

By NEAL WAGNER / Managing Editor COLUMBIANA – A 23-year-old Alabaster man could face up to life in prison if... read more