HOOVER – A 52-year-old Warrior woman is being held in the Shelby County Jail on bonds totaling $300,000 after she was charged with allegedly embezzling more than $200,000 from her Hoover employer. 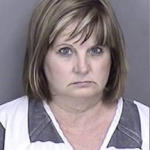 Higginbotham’s arrest came after she allegedly “stole and forged at least 135 checks” from her employer, Birmingham Internal Medicine Associates on Alabama 119, and “diverted them to her personal accounts during a seven-year period from 2007-2014.

“This is an ongoing investigation and more charges are expected,” read a Hoover Police Department press release. “Anyone with information about this case is asked to contact Detective Austin Tubb at 444-7602.”