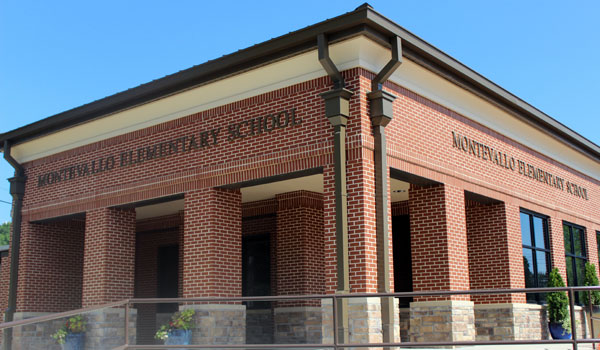 The new entrance at Montevallo Elementary School showcases some of the structural safety improvements completed under the Safe Schools Initiative. (Contributed)

COLUMBIANA—The Shelby County Commission is continuing its commitment to school safety through the Safe Schools Initiative. Developed in the spring of 2013 and implemented in the Shelby County School System, it is a partnership between the schools, law enforcement and the county that enhances the safety of students and faculty through drills, training, building improvements and planning.

“We’re really looking at what school safety means in light of Sandy Hook and other school shootings,” Shelby County Schools Assistant Superintendent Dr. Lewis Brooks said during a Sept. 8 Shelby County Commission meeting, adding the school system is “very confident that our plan is doing what it should” to keep students safe.

Brooks highlighted some of the programs introduced under the Safe Schools Initiative, including mental health services for “at-risk students” and safety features at school entrances.

“We’re improving the entrances to our buildings… creating a vestibule… If you visit a school, you’ll have to be buzzed in,” Brooks said. “It’s a comprehensive approach to school safety.”

Brooks thanked the Shelby County Commission for their help in supporting the Safe Schools Initiative, which he characterized as “unprecedented.”

“Everyone has done a great job in pulling this together,” Brooks said. “No one is doing anything like this… We’re very proud of this.”

According to the proposed spending the Shelby County Commission has pledged $142,500 to fund the initiative in Shelby County Schools, and the school system has allotted $305,000.

Members of the Union United Methodist Church are working to restore the chapel and cemetery. (For the Reporter/Ginny Cooper McCarley)... read more