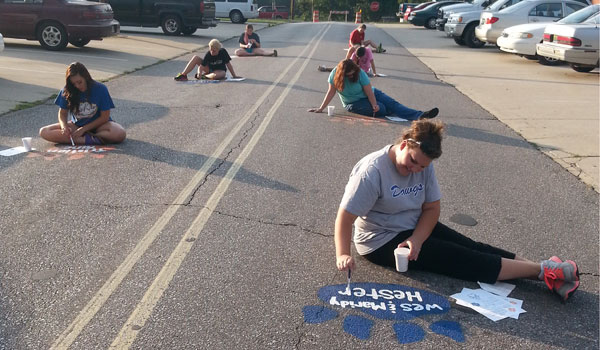 Members of the auxiliary team for the Montevallo Marching Troubadours paint paw prints on Island Street in Montevallo. (Contributed)

The project, which was unanimously approved by the Montevallo City Council during an Aug. 11 meeting, served as a fundraiser for the marching band.

Anita Glover, media specialist at Montevallo High School and mother of head majorette Maggie Glover, said the idea for the project stemmed from a conversation with a friend about fundraising opportunities at other schools.

“The paw prints used to be painted on the road every football season, but for some reason, it just hasn’t been done in a while,” Anita Glover said. “After talking with our mayor, she said several people had mentioned to her that the prints needed to be painted again. Therefore, the paw print project started.”

The paw prints line both sides of Island Street in Montevallo, beginning at Alabama 119 and continuing in front of the football stadium.

“So now if people need to know how to get (to the stadium), we can just say ‘follow the paw prints,’” Anita Glover said.

“The auxiliary truly thanks the city and community for their support,” Anita Glover said. “It turned out to be a good fundraiser and an awesome way to show community support.”