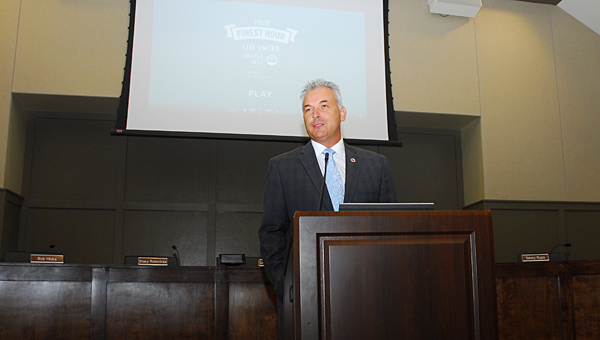 ALABASTER – Shelby County Commissioner Mike Vest wasn’t sure what to think when he heard his father was living in a vehicle in the parking lot of a hotel near the Birmingham-Shuttlesworth International Airport.

Vest had been living in Dallas for several years before returning to Birmingham in 2004. His father had told him to meet him at the hotel off Messer Airport Highway.

After asking in the hotel’s bar if anyone knew his father, Vest was directed outside to the parking lot, where he found his father sleeping in a vehicle beneath three blankets.

“How does it make you feel to see your dad like that?” Vest told about 100 people gathered at Alabaster City Hall on Sept. 16 for the United Way Shelby County kickoff event. “Right then, I knew it was my turn to help him.”

Vest helped his father find and move into an apartment in Springville, where he paid his rent on time every month until he died a few years ago.

Just as Vest helped to pull his father from a negative situation, a United Way agency helped Vest to escape a potentially negative life situation when he was a child.

When Vest was a child growing up in Birmingham, his brother became addicted to drugs. As an at-risk youth, Vest entered the Big Brothers Big Sisters program, where he was mentored by a man he is still friends with today.

“If it wasn’t for United Way, I wouldn’t be here today,” Vest said. “God had a plan for me because of United Way.”

The United Way of Central Alabama is looking to increase funding to organizations such as Big Brothers Big Sisters of Shelby County this year, as demand for local nonprofit services has increased over the past few years.

“Of the 28 United Way organizations that provide services in Shelby County, 91 percent say demand for their services is up significantly,” United Way of Central Alabama CEO Drew Langloh said. “But their sources of support have not.”

The United Way is looking to raise a total of $2.7 million in Shelby County during this year’s campaign.

To donate to the United Way 2014 campaign, or to view a listing of United Way agencies with Shelby County connections, visit Shelbyal.com/CivicAlerts.aspx?AID=34.

Watching Montevallo High turn things around has been quite fun so far. There’s still a long way to go, though,... read more