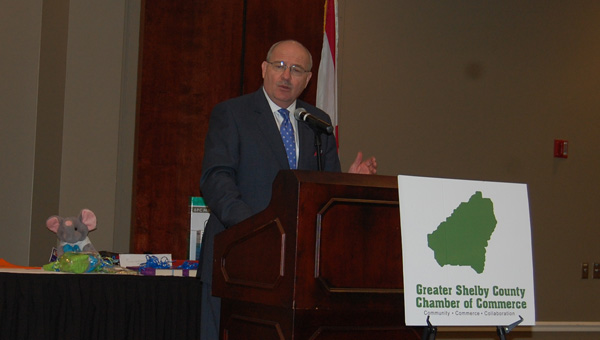 Alabama’s obesity rate is well above the national average, Williamson said, and if the state trend continues, “60 percent of Alabama will be obese by 2030.”

“If we could reduce the average body weight in Alabama by five percent, we would save $3 billion in nine years,” Williamson said.

A “significantly” high number of Alabamians die from smoking-related health complications as well, a “preventable cause of death,” Williamson said.

“We get an F on our tobacco tax,” Williamson said, noting Alabama has the 47th lowest tobacco tax in the nation. “A $1 increase will prevent 73,000 children from becoming addicted to smoking.”

The health problems are evident and the solution lies in education, Williamson said, noting a connection between income, health and education.

“People making less than $10,000 were 3.22 percent more likely to die (from all causes) than those making more than $30,000,” Williamson said. “Your perception of your health is directly related to your income.”

From the Health Focus of the Month found in the GSCCC newsletter to a upcoming healthy lifestyles expo, the GSCCC supports healthy choices and offers programs to promote good health in Shelby County.

“Part of our five-year strategic plan was promoting healthy lifestyles,” GSCCC CEO Kirk Mancer said. “Healthier employees are happier employees, it benefits all of the businesses in Shelby County… (businesses) are only as good as their employees.”

The Alabaster City Council approved an about $25 million budget during a Sept. 25 meeting. (File) By NEAL WAGNER /... read more