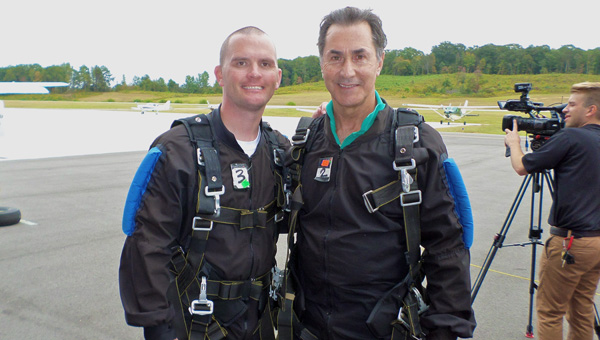 Dustin Chandler and Gary Palmer return after jumping out of a plane during the Sept. 27 Skydive 4 CDKL5 Research event at Skydive Alabama. (Reporter Photo / Molly Davidson)

“It humbles me for them to come do this,” Chandler said of all those who supported the Skydive 4 CDKL5 Research event. “There’s no feeling like it in the world.”

Chandler’s daughter, Carly, suffers from CDKL5, a rare neurological condition that causes “difficult to control” seizures and results in “severe neuro-developmental impairment,” according to the International Foundation for CDKL5 Research. There are currently more than 100 documented cases of CDKL5 and this number is growing, however there is no cure.

“I have two daughters and I have a son. If it were one of my children, I’d be begging people to help out,” Palmer said, adding he was happy to join in Skydive 4 CDKL5 Research and support “a good cause.”

By the end of the day, the event raised more than $56,000 for the International Foundation for CDKL5 Research.

“We’ve got to do something to bring awareness to those little known and little understood diseases,” Waters said. “Dustin Chandler on his own is a force to be reckoned with, but when he’s inspired by his daughter, he’s unstoppable.”

And as for the jump?

“It was better than last year,” Chandler said. “You’re way above the clouds, it looks like a mountain range up there… You’re near God up there, it’s unbelievable.”

Both Chandler and Waters jumped during the first edition of Skydive 4 CDKL5 Research, but for Palmer, the Sept. 27 jump was his first skydiving experience.

“I’ve always had enough sense not to jump out of a perfectly good plane,” Palmer said with a laugh. “It was great… it was an incredibly peaceful feeling.”

By NEAL WAGNER / Managing Editor A 31-year-old Randolph man was killed on Sept. 27 when the motorcycle he was... read more