Alabaster homecoming parade is next Wednesday 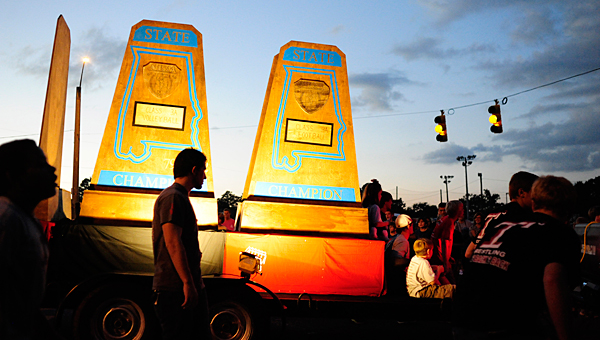 About 50 floats will participate in Alabaster’s homecoming parade on Oct. 8. (File)

ALABASTER – About 50 floats have registered to participate in Alabaster’s homecoming parade on Oct. 8, marking an increase from last year’s well-attended parade.

The parade, which will be themed “Warrior Pride” this year, will begin at 6 p.m. at Thompson Middle School, and will travel down Warrior Drive before turning right on Thompson Road. The parade will then turn left on Alabama 119 before ending in the Thompson Sixth Grade Center parking lot.

This year’s parade grand marshal will be the Alabaster City School System’s mascot and therapy dog, Warrior the Australian Shepherd, who will ride in the parade’s lead car.

After the parade, the community will hold a pep rally at Larry Simmons Stadium at 7:15 p.m. in preparation for the Thompson High School Warriors’ Oct. 10 football matchup with Hewitt-Trussville.

This year will mark the first homecoming since the installation of a turf field and significant renovations to Larry Simmons Stadium, which were completed before the Warriors’ home opener against Hoover in September.

To view a map of the parade route, along with suggested safe viewing areas, visit  http://cityofalabaster.com/residents/homecoming-parade-route/

Volunteers work to unload nearly 2,900 pumpkins at the First Presbyterian Church of Alabaster on Sept. 29. (Contributed/Rachel Blackmon) By... read more