KCS, Chubb’s help feed those in need in Alabaster 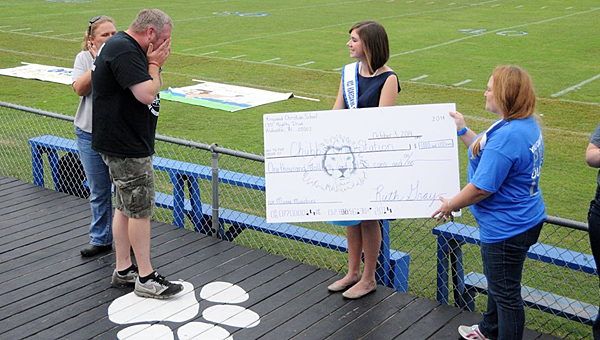 Chubb’s Grub Station owner Will Cholewinski, left, is overcome with emotion as Kingwood Christian School students present a donation to his charity. (Contributed)

“He came and spoke to our students before homecoming week even began so he could share his heart,” KCS Principal Ruth Gray said during an Oct. 7 interview. “He told them about how when he was a kid, he struggled with hunger. He made a vow that if he was ever in a position to do so, he would always help feed people who are in need.”

Each homecoming week, KCS selects a local charity or nonprofit organization to support.

“We do that because it allows the students to put a name with the face. They can see where their donations are going,” Gray said. “This year, we decided to partner with Chubb’s and support his charity.”

Chubb’s, a popular Alabaster restaurant off First Street Southwest, regularly accepts non-perishable food items from its customers and matches the customer donations with food donations of its own.

The food donations benefit local organizations such as Manna Ministries, which operates in the Alabaster First United Methodist Church Restore building and provides food to those in need every Saturday morning.

“The kids realized the money and food they collected would stay here in Alabaster, and they really dug in,” Gray said.

Before the Kingwood Lions’ Oct. 3 football game against Cornerstone Christian, the school presented Cholewinski with $1,000 and 1,155 canned food goods collected by students to benefit Manna Ministries.

“He was overwhelmed with emotion,” Gray said of Cholewinski. “It’s just a really great way for us to teach our children how to put your money where your mouth is. It’s a great learning tool for them.

“The kids can feel that they are really making a difference,” she added.