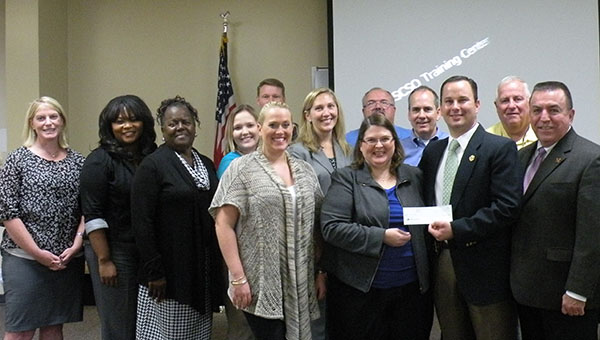 A check is presented to Cindy Greer, director of Owen’s House for $4,000 at the Shelby County Sheriff’s office Tuesday, Oct. 7. (Contributed)

COLUMBIANA–A celebration took place on Tuesday, Oct. 7 at the Shelby County Sheriff’s Office Training Center as members of the Fraternal Order of Police and Owen’s House celebrated a new milestone.

The 10th annual Ruth Barnes Memorial Golf Tournament at Ballantrae Golf Club was held Aug. 28 to raise money to benefit Owen’s House, a nonprofit agency that serves victims of child abuse and their families, and assists in child abuse investigations.

A grand total of $4,000 was raised for the organization, the largest amount in the ten-year history of the tournament.

Executive Director of Owen’s House Cindy Greer was excited about the amount of money raised and detailed how the Fraternal Order of Police plays a role in the overall goals of the organization.

“Owen’s House is like a hub on a bicycle wheel,” said Greer. “The FOP and other organizations are like the spokes on the bike, without the spokes the wheel cannot turn. We have a great relationship between organizations and all have the same goal of helping and improving children’s lives.”

The money raised will continue to go towards different programs including therapy, court support and parenting classes.

Shelby County FOP President and Sergeant with the Shelby County Sheriff’s Office Clay Hammac presented the check to Owen’s House Tuesday morning and praised the work the organization continues to do.

“We are very proud to announce that we broke the record this year and proud to present the $4,000 to Owen’s House,” said Hammac. “We are very appreciative of what your organization and what you continue to do in kids lives.”

Part of the money raised is also used for training at the Shelby County Sheriff’s Office.

Non-profit to donate 2,000 books to MVES