National Night Out held for first time in Chelsea 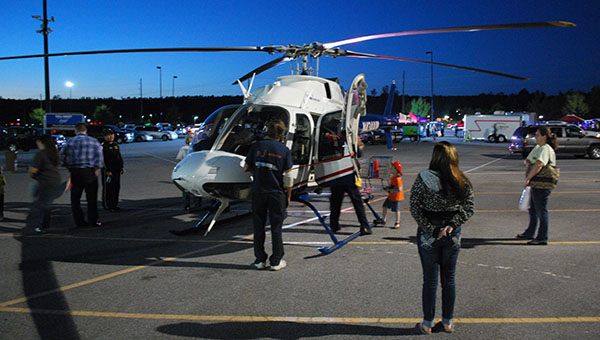 The LifeFlight Helicopter was one of the big attractions at Chelsea’s National Night Out. (Reporter Photo/Graham Brooks)

CHELSEA–The nationwide event known as National Night Out, spotlights efforts to promote involvement in crime prevention activities and neighborhood camaraderie, was held for the first time in the Chelsea Wal-Mart parking lot off Highway 280 the evening of Oct. 7.

Shelby County has participated in the event for the past 10 years in Alabaster but this marked the first time that the event was held in Alabaster as well as in Chelsea.

The event kicked off at 5 p.m. and multiple police vehicles, ambulances, a helicopter and businesses were some of the things on display for the public to view and learn more about the specialized equipment and resources used for their communities.

The night was highlighted by the unveiling of Chelsea’s new fire engine that was also on display for the public.

Shelby County Fraternal Order of Police President and Sergeant with the Shelby County Sheriff’s Office Clay Hammac discussed why the event is important and how the public benefits from attending National Night Out.

“It allows the community to put a face with law enforcement,” said Hammac. “This is more of a relaxed environment and is used to connect members of the community. The community can see the type of equipment we utilize and it keeps a line of communication open between us and the public that’s really beneficial.”

Children and adults alike used the night out to view the technology that runs the specialized vehicles used in law enforcement and other agencies.

The biggest hit of the night was the medical helicopter, where citizens could get an inside look at the helicopter and children could have their picture made inside of it. The ones who hung around until 7 p.m. then got to see the helicopter lift up and take off out of the Wal-Mart parking lot.

National Night Out began in 1984 and now involves over 37.8 million people and 16,124 communities from all 50 states, U.S. Territories, Canadian cities and military bases worldwide according to the NATW website.

Searchers have identified an area of interest in the search for a diver reported missing from a Pelham quarry on... read more