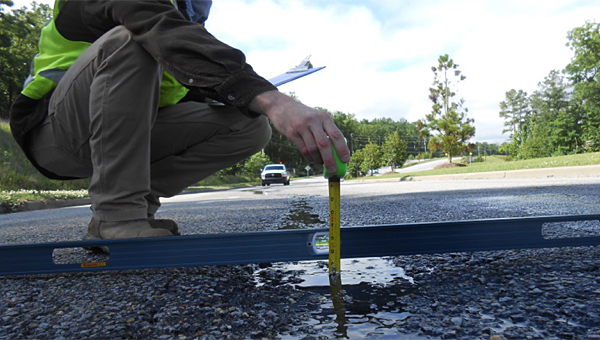 Crews measure dips and potholes during a previous inspection of Alabaster Boulevard. The road soon will see repairs. (File)

ALABASTER – Drivers on a heavily traveled Alabaster road will have a smoother ride “within days,” as the city is preparing to install a temporary fix on a failing portion of the road while permanent fixes are finalized.

During an Oct. 9 City Council work session, Alabaster City Manager George Henry said city crews are preparing to install the temporary fix, which will alleviate a pavement dip on the road.

“It will be done within days, if they haven’t already done it,” Henry said of the temporary fix. “This is not permanent. It will not be a smooth surface because it’s just a temporary fill.”

A recent engineering study revealed the road was in overall “poor” condition, Alabaster City Engineer Brett Tucker told council members in July. Over the past several years, poor road base and fill materials under the roadway have caused parts of Alabaster Boulevard to develop humps and “places where the pavement is graveling out,” Tucker said

The City Council likely will vote during an upcoming meeting to approve $16,000 to fund further surveys on the road. The engineering firm also will prepare documents to allow the city to bid out the road repairs over the next few months, Henry said.

During construction of the permanent repairs, portions of Alabaster Boulevard will temporarily be closed to traffic.