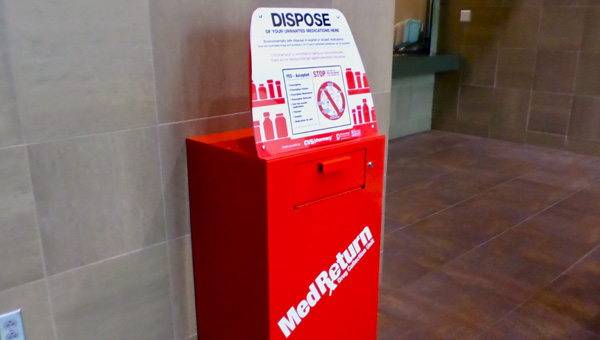 PELHAM—Do you have any expired medication or left over prescriptions? Dispose of them simply, safely and anonymously at the Pelham Police Department.

“You don’t have to see anybody, you don’t have to talk to any of our personnel,” Pelham Police Department Deputy Chief Larry Palmer said. “We don’t inventory (what is collected), we don’t look at them. We take them and immediately destroy them.”

The box is part of the Pelham Police Department’s participation in the Drug Enforcement Administration’s drug take back program, mainly focused on the proper disposal of prescription drugs.

“The illegal use of legal narcotics and prescriptions is a serious problem,” Palmer said. “It’s right at the top along with all the nasty illegal stuff like heroine, marijuana and cocaine.”

However, Palmer said over-the-counter drugs are welcome to be placed in the drop box as well.

“There is some over-the-counter stuff that is pretty serious,” Palmer said. “So, if you feel more comfortable dropping it off, please do.”

The drop box is a permanent fixture and all prescription medications and ointments, over-the-counter medications, vitamins, sample medications and pet medications are accepted. Liquids and items such as inhalers, aerosol cans, thermometers and needles are forbidden.

“We hope this is a success,” Palmer said. “We’re hoping to have to empty it twice a week.”

By NEAL WAGNER / Managing Editor COLUMBIANA – A 33-year-old Fultondale woman has been released from jail on bonds totaling... read more