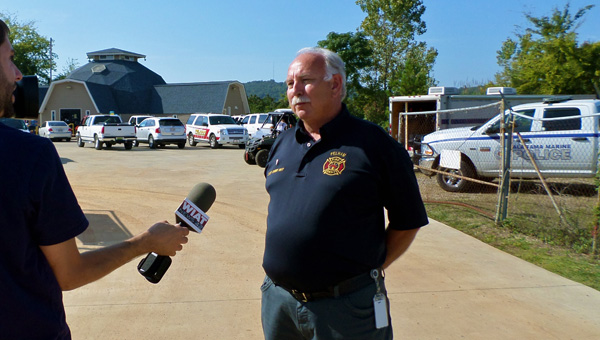 PELHAM—As the search for a missing diver in a Pelham quarry completes a fifth full day, search teams have shifted from using divers to technology to map the quarry floor.

Daren Gray, 49, of Spring Hill, Tenn., was reported missing the evening of Oct. 4 after he failed to report back from a routine dive trip at Dive Alabama, located off on Industrial Park Drive in Pelham. Since that time, search teams have utilized highly-trained technical divers and advanced technology to locate Gray in the 27-acre quarry.

Oct. 9 Search efforts began with teams of technical divers systematically searching a 100-yard by 300-yard area of the quarry where “significant indicators” had been recorded, pointing to the possible presence of the missing diver or equipment, Pelham Fire Department Chief Danny Ray said.

Divers are worked the area throughout the morning using a technique Ray described as a “wagon wheel search.”

“We dropped a buoy in that area (where we had a significant indicator),” Ray said, explaining teams of deep-water divers then tether themselves to the buoy’s anchor rope and clear a 100-foot circle centered around the buoy.

“There are areas where the silt is four to six feet deep,” Ray said of the area the divers searched. “You can sink down into it.”

New technology to help divers and searchers combat the challenging conditions arrived at the quarry in the afternoon, Ray confirmed.

As of 4 p.m. on Oct. 9, all divers were out of the water in order to give them appropriate recovery time. Search efforts were focused on using the new sonar system to map the deepest part of the quarry.

“We’ve got a lot of divers that have reached their limit on dive time,” Ray said. “The concentration right now is getting the mapping done.”

In addition to the sonar system, a “mask system” allowing divers to see through the thick quarry silt arrived from Coffee County, Tenn. The DIDSON-DH system made by Sound Metrics Corporation consists of handheld sonar, which scans the area around the diver and sends an image to a headset and flip-down visor. This specialized equipment is not built to withstand decompression diving and can only be used for a quick “bounce dive,” Ray explained.

If the mapping sonar reveals a promising hit, a diver equipped with the DIDSON-DH system will make a quick dive to confirm if the indicator is the missing diver or his equipment.

“The visor hasn’t been deployed yet… we’re saving… that technology for a true confirmation,” Ray said.

Teams will continue to search the quarry until a result is reached, Ray said, although he said ensuring the searchers are rested and hydrated is a concern.

“That’s one of the big things,” Ray said. “The heat has come back up, (we need to) make sure everyone’s not too fatigued and well hydrated.”

Quilts of Valor ceremony is Oct 11

Sarah Atchison is holding the “in honor of” quilt she made for the grand door prize at the Columbiana Quilt... read more