Brittney Lovoy and Micah Woodley were married on Sept. 20 at 4 p.m. at Douglas Manor in Columbiana.

Brittney Lovoy is the daughter of Angela Lovoy of Pelham and David Lovoy of Alabaster, and is the granddaughter of Daphene Henderson, the late Ivan Henderson, Mary Ann Lovoy and the late Louis Lovoy.

Michal Woodley is the son of Marilyn Woodley and Michael Woodley, and is the grandson of the late Essie and Leonard Lockhart, U.V. Woodley and the late Raymond Woodley.

Brittney Lovoy is a graduate of Pelham High School and the University of Montevallo, and holds a bachelor’s degree in elementary education. Micah Woodley is an alumni of Jefferson State University.

The bride wore an ivory fitted lace with pearls wedding dress, and carried mini callas and roses wrapped with her grandfather’s handkerchief. 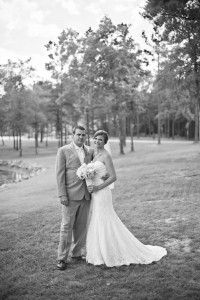