Students have fun while raising money for breast cancer awareness 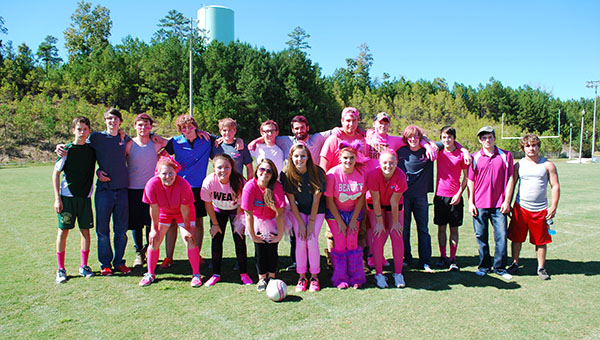 SCCCC students participated in a kick ball game to raise money for their annual Pink Out Day. (Reporter Photo/Graham Brooks)

Columbiana–It was a sea of pink at the Columbiana Sports Complex Friday, Oct. 17 as students and faculty at the Shelby County College and Career Center raised money for their fifth annual pink out event for breast cancer awareness.

Pink Out King and Queen

Students and faculty gathered for a big kickball game where they paid $2 a piece to either play in the game or watch.

The sale of lemonade, popcorn, cookies, face paint, hair ties, t-shirts and other things were sold to help raise funds for breast cancer awareness as well.

Students also had the opportunity to pie many of the teacher’s in the face, which brought a lot of laughs along with it.

English teacher and SGA Sponsor Kim Estill discussed the excitement building up to the ‘Pink Out’ and why it is such a great event.

“We’ve raised thousands of dollars over the years and it’s great to bring awareness to this horrible disease,” said Estill. “Seeing the students support such a worthy cause and having fun at the same time is just awesome to see.”

Starting on Tuesday, Oct. 14 SCCCC had dress up days such as pajama day, super hero day and camo day before ending the week with the pink out.

Before the kickball game, the ‘pink out’ king and queen were announced. Jason Champion and Payton Jebeles were both chosen for showing the most spirit and wearing a lot of pink.

Kiera Hiatt, a senior at SCCCC and SGA President talked about some of her favorite things that go into planning the event.

“My favorite thing is just being able to have fun while raising money at the same time,” said Hiatt. “Having the kickball game and decorating the school is also fun too. I was the vice president for SGA last year and I got some great insight for this year when we started planning for the pink out.”