COLUMBIANA—A Bessemer man will spend the next eight years in prison for selling cocaine in the parking lot of a Helena church in 2013. 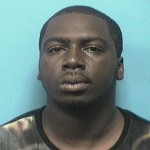 Jamell Williams, 29, who goes by the alias “Chicken,” according to court documents, pleaded guilty to unlawful possession of a controlled substance, a class-B felony. Williams has three prior adult felony convictions.

Williams was arrested by the Shelby County Drug Enforcement Task Force in April 2014 and was indicted by a grand jury in June 2014 on three counts of distribution of cocaine.

According to court documents, Williams sold cocaine “at or near the parking lot of the Riverside Baptist Church” in Helena, and “within a three-mile radius” of a school or “public housing project owned by a housing authority” on three separate occasions in May, October and November of 2013.

Judge Dan Reeves sentenced Williams to eight years in the state penitentiary and more than $2,000 in fines and court fees. At the time of sentencing on Sept. 25, Williams had accumulated 52 days of jail credit.