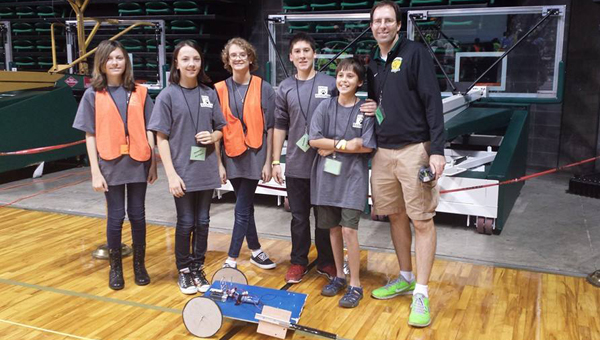 PELHAM—With the first competition under their belts, the Pelham City Schools robotics teams aren’t slowing down. The Riverchase Middle School and Pelham High School teams are continuing to build, program and prepare for their next competitions.

Robotics is a new addition to the extracurricular offerings at RMS and PHS, and the students got their first taste of competition on Oct. 4 at UAB’s Bartow Arena during the Blazer Boosting Science Engineering and Technology competition.

“It was eye-opening from the start,” RMS robotics coach Patrick McDonald said of the competition that included middle school and high school teams from across the greater Birmingham area.

Blazer BEST is a six week long program sponsored by UAB’s engineering department. Students are tasked with building a robot to navigate and complete tasks on a game board, competing against other schools.

The robot is only a small part of the competition. Teams must also keep an engineering notebook and create a business and marketing plan for their robot, including a team t-shirt, informational poster board and oral presentation.

“The kids did an outstanding job,” McDonald said. “Not only did they have an objective to accomplish, they had a timeframe to do it in too… (There were) five huge things they were able to do in sixe weeks.”

“It was an unbelievable experience… Our kids were so blown away,” PHS robotics coach Tim Cobb said of the competition, noting the sportsmanship displayed by the teams at the competition.

Using their experience from the Blazer BEST competition, the Pelham teams are working toward their next competitions.

Cobb said the PHS team is already busy preparing for the VEX robotics tournament, which consists of building a robot for competition, but it also has a virtual component in which students can design and construct robots for competition entirely online.

“That will allow every one of my kids… (to) go online and build (their) design and compete,” Cobb said.

Cobb and McDonald are both already planning for next year. With the development of specialized academies at Pelham High School, robotics will be worked into the curriculum at both the high school and middle school levels, both Cobb and McDonald said.

“We’re looking at spring-boarding this into a pre-academy,” McDonald said, explaining the robotics team will prepare middle school students to enter the engineering academy in high school.

But the robotics teams teach more than programming and technology skills, both Cobb and McDonald said. Students learn college and career-ready skills and teamwork.

“They’re having to learn to collaborate and work together as a team,” Cobb said. “That collaboration and working together is something they’ll encounter in every job.”