ALABASTER – For Alabaster City Council member Russell Bedsole and his wife, Dena, Nov. 1 will mean much more than the start of a new month. It will provide a chance to them to combat one of the biggest discrepancies in the fight against cancer.

“By 2020, pancreatic cancer will be the second-most deadly form of cancer,” Dena Bedsole said during an Oct. 27 interview. “But only 2 percent of all cancer fundraising goes to fight pancreatic cancer.”

The Bedsoles have both been personally affected by pancreatic cancer, as Dena lost her father, Eddie Dixon, and Russell lost an uncle, Bill Lambert, to the disease, which affects about one in every 67 people over their lifetimes.

Seventy-five percent of those diagnosed with pancreatic cancer die within a year, and only 6 percent for five years after diagnosis, Dena Bedsole said.

“Clearly, because of my dad, this is an important issue to us. But we are fighting so there will be more survivors of this disease,” Dena Bedsole said, noting she recently spoke at an event during which the pancreatic cancer survivors’ seating row was nearly empty. “There just aren’t many survivors.”

The Bedsoles are hosting a “Lift awareness for pancreatic cancer” event on Saturday, Nov. 1 from 10 a.m.-3 p.m. at Crossfit Sky Soldiers at 1500 Simmsville Road in Alabaster.

Cost to attend either the morning or afternoon event is $25, or $40 to attend both events and receive a T-shirt.

The event will also feature a silent auction with a range of products, a dunking booth and vendors. All money raised during the event will benefit pancreatic cancer research.

“This is a curable disease. We just have to give our effort, time and, yes, even our money,” Russell Bedsole said.

For more information about the event, contact Dena Bedsole at 369-3939 or visit Goo.gl/HgvNYY. 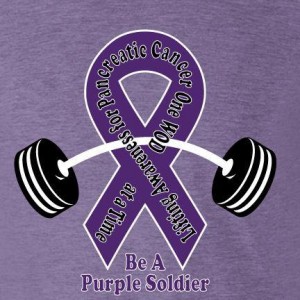