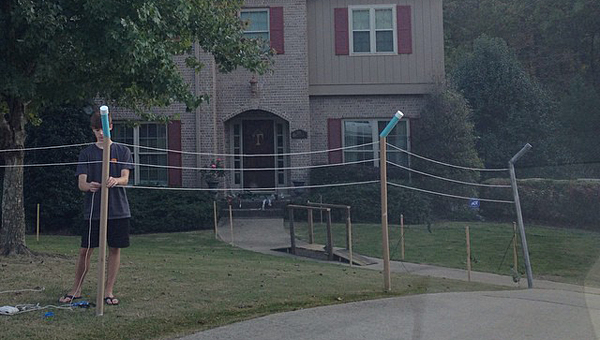 “I knew I wanted it to be different this year,” Talbert said during an Oct. 28 interview, noting he decorated his Alabaster house in a Wizard of Oz theme last Halloween. “You can’t get much different than the Wizard of Oz and Jurassic Park.”

For the past several years, Talbert has created extravagant Halloween displays at the family’s house at 205 Kensington Lane. In 2011, he transformed the house into a pirate ship, he created a mad scientist theme in his front yard and garage in 2012 and transported visitors to the land of Oz in 2013.

Almost as soon as the 2013 decorations went down, Talbert was already planning for this year’s Jurassic Park-themed display. 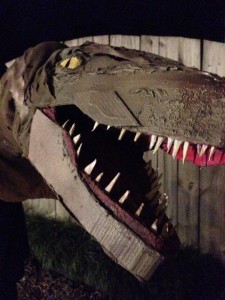 One of Talbert’s hand-made dinosaurs. (Contributed)

“I started planning what I wanted it to look like last Christmas, and I’ve been working on it since then,” Talbert said. “It’s not like I work on it for hours every day for a year. I start building, and it just kind of happens.”

This year’s decorations will include a gamut of scenery from the dinosaur-themed movies, such as an electric fence surrounding the yard, a rocking footbridge and even a few surprises for visitors as they traverse the thrilling trail.

“There will even be a life-size T-rex. Well, as life-size as you can put together in a basement. It’s more than 10 feet long,” Talbert said with a laugh.

Over the past several years, Talbert’s Halloween decorations have become well-known in Alabaster not only for their scope, but also for the way they are constructed. Talbert hand-makes nearly all the decorations in the display.

For the dinosaurs, Talbert started by building a skeleton – usually made of wood or metal wire – and then covered the skeletons with couch cushions and other materials. He then covered the cushions with paper mache, painted and detailed them.

“The velociraptor is so detailed, all the way down to the teeth and the drool in its mouth,” Talbert said.

Last year, Talbert’s decorations drew more than 300 visitors on Halloween night. This year, he is expecting many more.

“The thing is, last year Halloween was on a school night and it was raining,” Talbert said. “This year is my first real year to do Halloween on a Friday night. I’m hoping for a lot of people.”