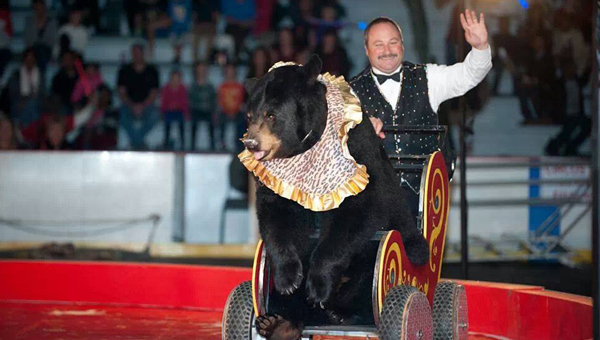 The Zamora Shrine Circus will feature bears, elephants, acrobats and clowns. It will be hosted at the Pelham Civic Complex and Ice Arena on Nov. 14-16. (Contributed)

PELHAM—Elephants, bears on motorcycles, acrobats and clowns will take over the Pelham Civic Complex and Ice Arena for the Zamora Shrine Circus, Nov. 14-16.

The annual circus will feature acrobats in high-flying and balancing acts, elephants, “the number one bear act in the country” and the “globe of death,” in which multiple motorcyclists speed around a large octagon cage, Zamora Shrine Board of Directors member Brian Fason explained. Pelham Mayor Gary Waters will serve as a special-guest ringmaster for a performance.

“We’ll have just about everything people would expect to see at a circus,” Fason said. “We try to do a good balance of acts.”

Children will be able to ride elephants and ponies, jump in a bounce house and get their faces painted during a one-hour pre-show before each circus performance. Clowns will be on hand throughout the event to take pictures, sign autographs and entertain circus-goers.

“We’ll have our own Shriner clowns be part of it as well,” Fason said. “It’s good, clean entertainment for the whole family.”

The circus is a Shriner tradition, and clubs across the country put on performances in order to raise funds and support the organization’s network of pediatric hospitals.

“It’s a great way to let people know who we are,” Fason said. “It allows the Shrine to keep doing what we have for 141 years, and that’s help kids.”

“I think the thing I like most about the circus is that you’re right up close to the action,” Fason said. “It’s affordable for any budget.”

Tickets can be purchased at Food Depot, Western Market and Walgreens locations in the greater Birmingham area, or online at Zamorashrinecircus.com.

Vincent’s Arshon Willis tries to break away from a defender in a battle with Talladega County Central Oct. 30. (Reporter... read more