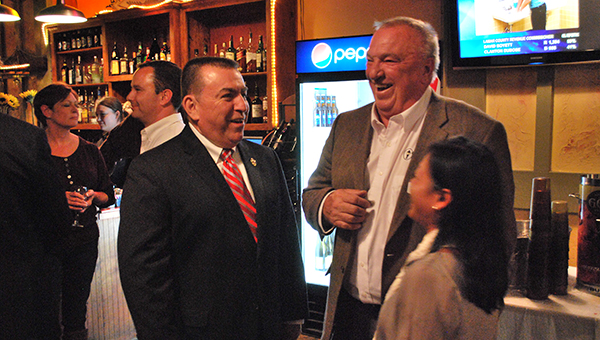 As of 10 p.m.,Samaniego has received more than 23,455 votes, or 82.26 percent, defeating Libertarian Party candidate Bailey.

Samaniego was excited and relieved that the campaign was over, but also showed that he is ready to start working with the citizens of Shelby County.

“Honestly the human emotion is a relief but I’m excited about the future and moving forward with an agency that’s already going great,” said Samaniego. “I’ve got some good ideas but I’m so proud of Sheriff Curry and we’ve built a beautiful agency and it’s looked at as one of the best agencies in the state and I’m proud of that.”

Samaniego served as Curry’s chief deputy ever since Curry was elected and discussed the influence Curry has had on him throughout the years.

“As the role of sheriff nobody does it better than him but I’m fortunate to be able to work with him and I couldn’t of learned it from a better person,” said Samaniego.

Samaniego thanked his supporters and reiterated that the citizens of Shelby County are what’s most important.

“The philosophy is that the number one priority is the citizens and serving them,” said Samaniego.

Samaniego, won the Republican primary nomination with 55.41 percent of the votes, after running against Larry McDow, Kip Cole and Rick Needham.

Amendment passes requiring county’s probate judge to be an…