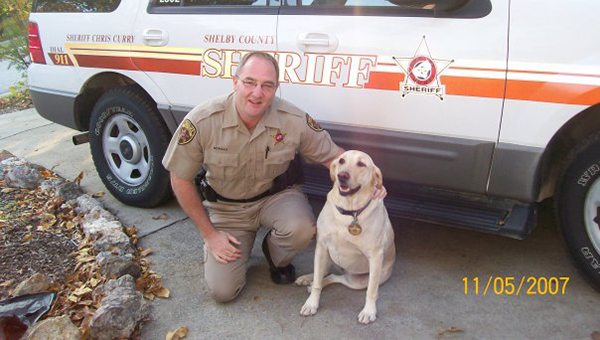 Deputy Allan Morgan was Shelby’s handler from 2003 to 2010 at the Shelby County Sheriff’s Office. Shelby recently passed away at the age of 12. (Contributed)

COLUMBIANA–A beloved K-9 who was a staple in the Shelby County community for more than 10 years has passed away at the age of 12.

Shelby, a yellow lab who came to the Shelby County Sheriff’s Office in April 2003, trained specifically as a narcotics dog and worked until her retirement in 2010.

SCSO Sgt. Russell Bedsole is a K-9 supervisor and described how things were before Shelby arrived in 2003.

Allan Morgan, who is currently a deputy and school resource officer at Oak Mountain High School, was Shelby’s handler and caretaker for the past 12 years.

“She was the most popular dog in Shelby County for years,” said Morgan. “She did demonstrations for kids and went to schools all over the county. I would use Shelby to teach kids on how to react when a strange dog walks up and what you’re supposed to do. She never met a stranger.”

Shelby and another lab, Chase, were born in the same litter in September of 2002 and once the K-9 program was reinstituted, Bedsole and Morgan began a strong bond with their dogs.

Both Bedsole and Morgan talked about the intense training sessions that would sometimes last between 10-12 hours a day. Both men and their dogs went through a four-week school and endured more training until they became certified to handle the K-9s.

Because of the training and constant time spent with the trainer and dog, a tight bond was formed between Morgan and Shelby. Shelby County Sheriff Chris Curry understands this and offered his condolences to Morgan and his family.

“Our deputies who volunteer for the canine program understandably form a strong bond with their canine partners,” said Curry. “The training is difficult and requires an investment of time between the deputy and canine, which strengthens their relationship.  Shelby was a beloved member of the Sheriff’s Office family.  She was well recognized in the community and loved by so many, even after her retirement from duty. My deepest condolences are extended to Deputy Morgan and his family as they grieve the loss of such a loyal and loving friend.”

Morgan has many fond memories of Shelby but one of his favorite stories to tell actually happened when Shelby was off-duty.

“One of my favorite stories to tell actually happened when Shelby was off-duty,” said Morgan. “We had a search warrant and I was taking Shelby to the back of an apartment to use the bathroom and she became alert. She went to a tree trunk and we found 3,000 Lortabs. We found out later that the drugs found belonged to the suspect for the original search warrant we came for.”