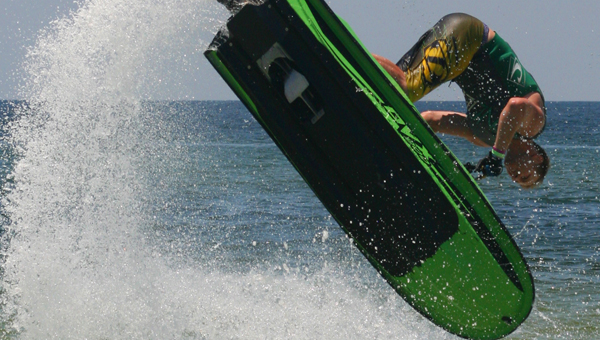 Pelham’s Peter Waldron is a nationally and internationally watercross jet skier and competes across the country on the Watercross Pro Tour. (Contributed)

PELHAM—It’s like motocross on a jet ski, that’s how Peter Waldron describes his sport, watercross. The Pelham native is ranked both nationally and internationally and competes in tournaments across the country.

Originally an avid wakeboarder, Waldron bought his first jet ski around five years ago, and that’s when his passion for jet skiing began.

“I saw some guys doing some big tricks, like backflips, and I said, ‘I want to do that,’” Waldron said.

Now Waldron competes in freestyle jetskiing on the Watercross Pro Tour. The tour season starts in early May and continues through August, with around seven tour stops across the country, from West Virginia to Arizona and Florida.

Waldron finished the 2014 season at second in the nation in amateur freestyle jet skiing and took fifth place at the International Jet Sports Boating Association World Finals in Lake Havasui, Ariz. He is currently preparing for the Daytona Freeride on Jan. 15-18, 2015.

Waldron lists a one-handed barrel role and a one footed back flip as the most difficult individual tricks he has mastered, but he said the real challenge lies in stringing stunts together into “trick combinations.”

In competition, freestyle jet skiers are judged on the “amount of tricks you can successfully complete in two minutes,” Waldron explained, noting judges also look at the degree of difficulty and innovation in each routine.

Although the Watercross Pro Tour takes place during the summer months, Waldron trains year-round to stay in shape and at the top of his game.

“I workout every single day after work so when I get to ride, I’m not winded,” Waldron said.

Along with land workouts, Waldron travels about an hour from his home to train on Lake Mitchell for 12 to 15 hours each week.

“If I had a lake in my backyard, it would be hard to get out and go to work in the morning,” Waldron said with a laugh.

In addition to competitions, Waldron also does freestyle shows. This past summer, he performed on the Fourth of July at Oak Mountain State Park.