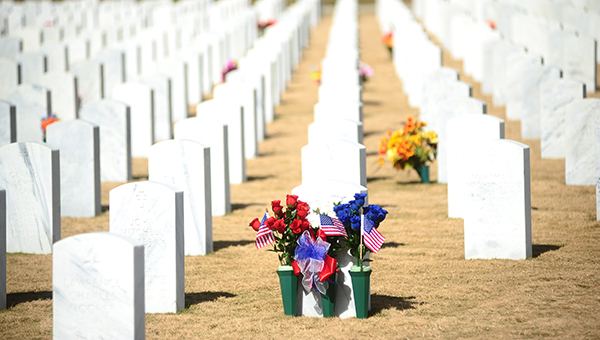 MONTEVALLO–Veterans Day is a time to honor active, retired and deceased men and women who have served in our nation’s military and defended our freedoms.

The American Village in Montevallo hosted several events on Tuesday, Nov. 11 for people who visited the grounds for Veterans Day.

One of the popular events of the day occurred at noon where there was a wreath laying on the brick plaza in front of the National Veterans Shrine to honor all veterans and active military.

Melanie Poole, marketing and communications director for American Village, stated that this year marked a record day for attendance for Veterans Day.

“On Feb. 17 of this year our Veterans Shrine opened and this was the first Veterans Day we’ve had the shrine,” said Poole. “We had around 20 veterans at the wreath laying at the statue in front of the shrine. We had veterans who served from WWII and who presently serve in Iraq and Afghanistan. We’ve had veterans come from as far away as Colorado and our oldest veteran here today was 93-years-old.”

The events took place from 10 a.m. to 4 p.m. and admission to the American Village was free to veterans and active military.

Some of the activities included seeing the American Village replica Oval Office, exploring the Pettus Randall Miniature Museum of American History, visiting with a patriot of the past and learning about life in the Continental Army of the American Revolution.

Housed within the Veterans Shrine is the Veterans Register of Honor, a website and database containing photographs, biographical sketches and stories of America’s veterans and active members of the United States Armed Forces.

“One of the most moving parts of the day was in front of the shrine and experiencing the new Veterans Shrine,” Poole said of the Veterans Day events. “Several Veterans said Alabama should be proud that the state has American Village and they wish that there could be more things like American Village in their home states.”