Handful of businesses opening in Columbiana 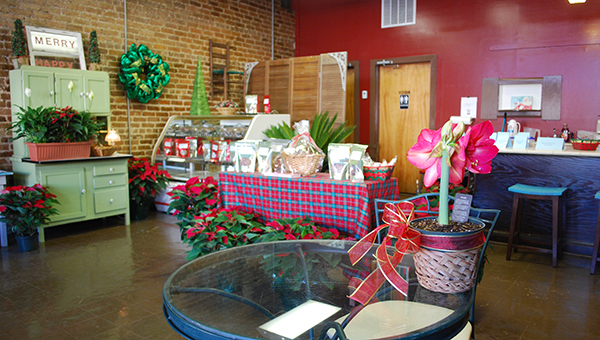 Here is the interior of Southern Tasty Treats & Gifts in Columbiana. The store is owned by Don and Ruth Driggers and opened on Friday, Nov. 14. (Reporter Photo/Graham Brooks)

COLUMBIANA–The economy could slowly be making an upswing and the city of Columbiana has seen a few businesses open recently with the possibility of more coming to the city in the coming weeks.

Southern Tasty Treats opened Friday, Nov. 14 on Main Street in downtown Columbiana in the building where the former Donut Chef business used to be.

The treat shop will sell flavored pecans, honey, coffee and other gift items during the holiday season.

Don and Ruth Driggers decided to open the shop in downtown Columbiana on a spur of the moment as Ruth described it.

“We’re from Vincent and have another business in Vincent and just opened this up for the holiday season,” said Ruth. “We do pecans and honey at our garden shop and my husband just had an idea to have a storefront in Columbiana.”

Ruth also added that customers can come in and try samples of the pecans and other treats before deciding to purchase anything.

The other two businesses coming to Columbiana are O’Reilly Auto Parts and Mundy Motor Company, which will both be located on West College Street.

Columbiana Mayor Stancil Handley contributes the opening of the businesses to a surge in the economy and is excited for the city.

“The businesses are all located within a two block area and all of them are within the down town area,” said Handley. “We are putting people back in buildings that have been empty for some time and it is encouraging that the economy is coming back up.”

“I see this as the work of Mayor Handley and the city council’s progressive and strong vision for Columbiana,” said Stone. “Mayor Handley has said many times Columbiana is open for business and its been exciting for me to see the mayor and city council put in the work and it come to fruition.”