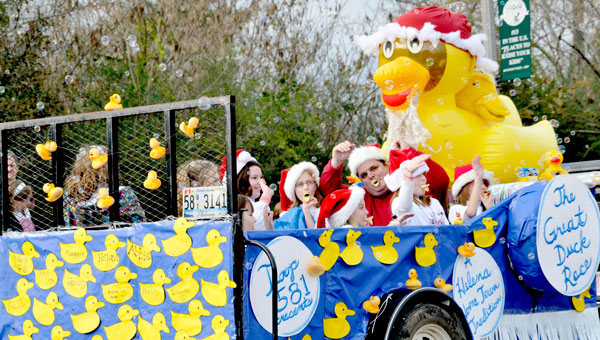 Helena’s annual Christmas parade showcases the many things the town has to offer. Pictured is a float from a previous parade. (File)

The parade will highlight Helena’s growth and all of the things the town has to offer, from shopping to dining to schools.

Lineup will begin at 10:30 a.m. and the Helena Christmas Parade will begin promptly at 1 p.m. at the beginning of Shelby County 261. The parade will travel through Old Town Helena and turn onto 2nd Street. The reviewing stand will be located at the First Baptist Church of Helena.

Childers suggested the Helena Post Office as a prime viewing location, but added parade-goers will have a good view from anywhere along Shelby County 261.

The 44th annual parade will feature floats and performances from numerous business and community groups in Helena. This year’s special group is “Helena’s very first high school band,” Childers said. Santa will also make a special appearance at the end of the parade.

To keep parade goers warm, Anna’s Angels will be selling coffee and hot chocolate. Headed up by Helena’s Anna Grace McDonald, Anna’s Angels is a team participating in the Dec. 13 Jingle Bell Run/Walk for Arthritis. Money the team raises from the coffee and hot chocolate sale will go directly to the Arthritis Foundation, Kayla Smeraglia, Arthritis Foundation development and services director, said.

“We do a lot with (the money raised), the majority of it goes to research,” Smeraglia said. “(Anna’s Angels) is setting up dents and they are going to sell coffee and hot chocolate… it’s a great way to get the word out.”

The Helena Christmas Parade has become a tradition in the town. It started as a small, evening parade and has grown into a large-scale afternoon event. There is no entrance fee and anyone is allowed to participate in the parade, Childers said.

“I look forward to each parade because each one is distinctly different… It takes on a life of it’s own,” Childers said. “ People just like it. It’s a good, old fashioned, hometown parade.”

From God to siblings: Students, parents give thanks