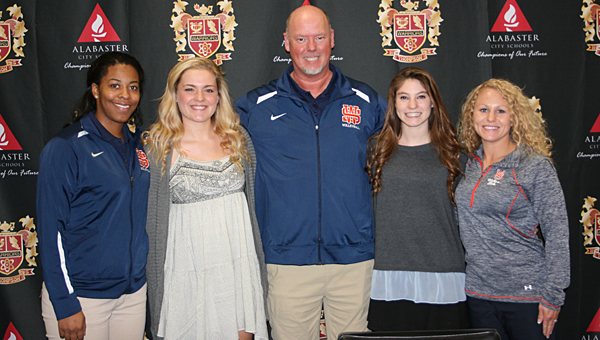 ALABASTER – A pair of Thompson High School seniors will continue their volleyball careers at the next level after they inked scholarships with a local college during a Nov. 12 ceremony.

THS seniors August Newberry and Tara Miller signed with Wallace State Community College during the ceremony in the school’s library, which was packed with an audience of friends, family members, coaches and teammates.

“The school allowed all students to attend, and we had a good crowd,” Miller’s mother, Lisa, wrote in an email, noting Miller’s uncle even flew in from Oregon to attend the ceremony.

For THS head volleyball coach Kellyanne Gandy, few things bring her joy like she feels when seeing one of her student athletes sign to play at the next level.

“As a coach, winning games brings a great amount of satisfaction, but I find true joy and happiness in seeing my players accomplish their dreams and goals when becoming a collegiate student athlete,” Gandy said. “It is a great feeling to know that their hard work, time, and effort is paying off by providing them a way to pay for college through athletic scholarships.”

Miller and Newberry signed two days before fellow THS senior volleyball player Taylin McCarver signed with the University of West Alabama in a similar ceremony in the school’s library.

Gandy also said she expects to have another senior ink with the University of Central Florida in April.

“In a class of seniors, you always hope to have a player sign a scholarship, but to have three seniors who have gotten to sign on the dotted line, is so exciting for Thompson’s volleyball program,” Gandy said.