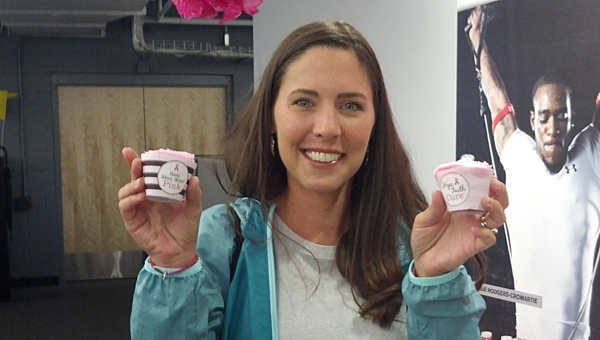 Alabaster native Jenny Davis recently wrapped up her year as an Under Armour Power in Pink ambassador. (Contributed)

By JON HARRISON / Special to the Reporter

“I got that call that nobody wants to get,” said Alabaster native Jenny Davis. “The call saying that, ready or not, you’re about to be in for the fight of your life.”

Davis was diagnosed with an aggressive form of breast cancer in March 2009, eight weeks into her first trimester with her third child. Davis was still nursing her seventh-month-old child when she found a mass in her breast.

“We went from what should have been a perfect situation to within a week of getting the biopsy they needed to take my whole breast,” she said.

Davis had recently moved from Alabaster to Fayetteville, Ga.

“We didn’t know anybody, and all of our family was back in Shelby County,” Davis said.

Davis said the chemotherapy process was a hard one and “took a village” to get through.

“It took all of our families coming over from Alabaster and Shelby Shores to cook meals and do things for the kids and to also take me to my treatments and appointments,” Davis said.

Once declared cancer free, Davis continued her activities with her local breast cancer support group and stayed in touch with the “sisters” that she had met throughout her journey.

Davis received a notification in May 2013 about Under Armor’s “Power in Pink” campaign through her support group’s Facebook page.

“It was an awesome campaign that just celebrated women, whether you were going through it or had been through it,” Davis said.

Davis applied in May and found out that she had been chosen as a “Power in Pink” ambassador for 2013.

She used this platform to spread her message of support and how leading a healthy lifestyle can help prevent cancer and also help combat the disease if diagnosed.

“My message was to take it one day at a time, find your inner strength, that women are amazingly strong and to just let people support and be there for you,” Davis said.

It has been five years since Davis’ diagnoses, and she is still involved with her local support group in Fayetteville, where she lives with her husband and their three children.