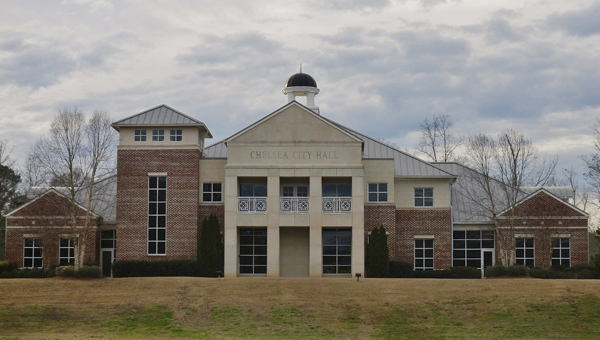 The Chelsea Planning Commission voted in favor of rezoning a parcel of land located adjacent to Lakewood subdivision on Shelby County 32.

CHELSEA–The Chelsea Planning Commission voted at a meeting Nov. 24 to receive a recommendation to rezone a parcel of land located next to Lakewood subdivision on Shelby County 32.

The commission held a public hearing for a rezoning request submitted by Jason Spinks for To Preach the Gospel, Inc. to have the 45-acre parcel rezoned from agricultural-residential (A-R) to residential (E-1).

Spinks said To Preach the Gospel, Inc. is “a missionary organization whose charge is to support ministers and to build churches across the world.”

“We feel like Chelsea and this particular piece of property is a good long-term investment for us,” Spinks said.

Spinks said the organization has no immediate plans to put in a subdivision or church on the property, but would prefer to have the property rezoned in case the plans change.

Chelsea Mayor Earl Niven asked Spinks if the group would build a church on the land, and Spinks said he would not object to it.

Property classified as E-1 is restricted to residential construction, but a church can be built in a residential area with special approval, Niven said.

Lakewood resident Fred Neighbors expressed concerns about the 45-acre parcel being separated into 1-acre lots with a house on each lot right behind his house.

“I want to know if that’s the plan, and if it is, I wouldn’t be in favor of that,” Neighbors said.

Spinks said he didn’t envision the organization having strictly 1-acre lots, but didn’t think lots as large as 10 acres were necessary.

“All we’re saying is this property is being re-zoned to an above 10-acre parcel to a 1-acre plus parcel,” Niven said, adding that To Preach the Gospel would have to meet E-1 standards and codes for construction. “This is a growing area for houses and for just about anything in Chelsea.”

Niven said the group would need to present preliminary construction plans to the commission. Then, the commission and its engineer would look at the plans before they were presented to the Chelsea City Council.

In other business, the commission tabled viewing Sector 14-Phase I Chelsea Park plans to be prepared by Scott Vaughn and Arrington Engineering until the next meeting.