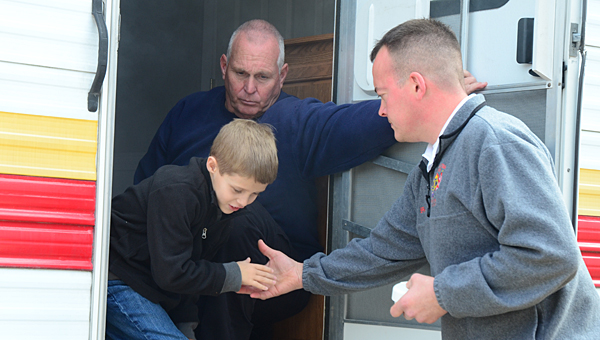 ALABASTER – Meadow View Elementary School second-grader Zahkira Scott stretched her hands in front of her body as she demonstrated how she found her way out of a smoke-filled trailer at the school.

“I went like this and felt the wall, and I found my way out like that,” Scott said after finding her way to the trailer’s door and escaping. “It’s dark in there.”

Scott and many of her second-grade peers at the school spent the day on Nov. 25 going through the Alabaster Fire Department’s “Smokehouse” simulator.

The department used the simulator, which once was a FEMA trailer used after Hurricane Katrina, to safely recreate a smoke-filled residential room. After filling the trailer with synthetic fog, the department placed four students at a time inside the room and taught them to “Get low and go” as they felt their way along walls to safety.

Second-grader Jacob Phipps said he enjoyed learning how to escape a dangerous situation, and said he planned to share the information with his family members after school.

“It wasn’t scary at all,” Phipps said.

Alabaster Fire Marshal Capt. Skip Leslie, who helped to guide students through the smoky trailer, said the department regularly brings the smokehouse to the city’s schools.

“We had one kid who went through it a few years ago, and his house caught fire a few months later. He used what he learned to get himself and his family out safely,” Leslie said. “Of all the kids who have been through here, if we save one life, it will be worth it.”

Brantley also encouraged the kids to come up with an escape plan and meeting place in case of a fire.