ALABASTER – A 40-year-old Alabaster woman is being held in the Shelby County Jail on bonds totaling $30,000 after she allegedly distributed controlled substances in Alabaster and Pelham over the past several months. 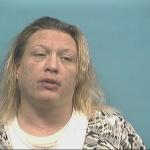 The Shelby County Drug Enforcement Task Force arrested Ashley Kara Powell, who lists an address in the 1100 block of Eighth Avenue Southwest, on Nov. 29, and charged her with three felony counts of distribution of a controlled substance.

Powell also allegedly distributed buprenorphine and amphetamine, which also is used to treat ADHD, from her Alabaster residence on May 8, according to her arrest warrant.

Unlawful distribution of a controlled substance is a Class B felony. If convicted, Powell could face up to 20 years in prison per charge.