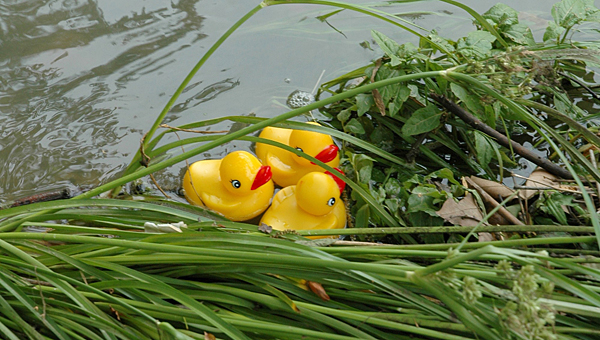 The Thompson soccer boosters are hosting a duck race to raise money for the TMS and THS soccer teams on Dec. 13. (File)

ALABASTER – Those looking to get some practice in before the annual duck race at Helena’s Buck Creek Festival in May will have a chance to do so while raising money for several local athletic teams on Dec. 13.

The Thompson Middle School and Thompson High School soccer boosters are hosting a pair of events on Dec. 13 to raise money for the schools’ soccer teams, which were recently named for the upcoming season.

“We had heard of other teams doing similar fundraisers and having a lot of success with them, so we wanted to give them a shot,” said booster club member Sybil Owens.

From 7-10 a.m. on Dec. 13, the booster club will host a pancake breakfast at Chubb’s Grub Station at 410 First Street SW in Alabaster. Tickets to the breakfast are $10 apiece, and are available by emailing Owens at sybilo@mindspring.com.

The booster club will follow the pancake breakfast with a “Duck dash” rubber duck race on Buck Creek in Alabaster’s Buck Creek Park at 11 a.m. Ducks are $5 apiece, and participants do not have to be present to win.

For more information on the Duck dash, contact Owens at sybilo@mindspring.com.

All money raised during the pair of events will help to fill the yearly $40,000 budget for Thompson girls’ and boys’ varsity, junior varsity and middle school soccer teams.

“We are still early in the year, but this will be a major fundraiser for us,” Owens said. “We are trying to get the word out as much as we can.”