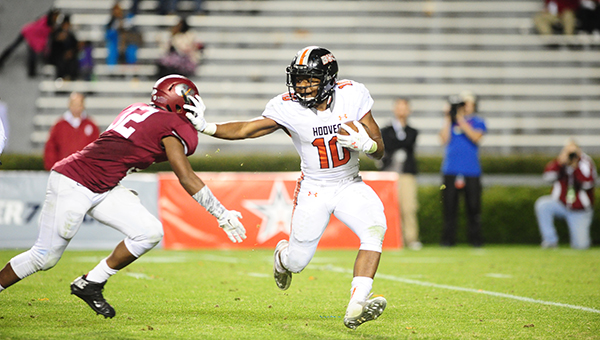 The Hoover Buccaneers won their third consecutive state championship behind Marcus Webb’s 153 rushing yards and one touchdown. The Bucs racked up 244 total rushing yards in the game and defeated Prattville 35-21. (Reporter Photo/Jon Goering)

The Hoover Buccaneers and Prattville Lions have been familiar foes in recent years and they met once again under the lights of Jordan-Hare Stadium on Wednesday, Dec. 3 where Hoover defeated Prattville 35-21 winning the first ever AHSAA Class 7A State Championship game.

“It is not just about a state championship,” Hoover head coach Josh Niblett said after the game. “It is about having an opportunity to wake up this morning and make the most of what we do. We talked to the kids about winning the day every day and being 1-0 so every week is a different ballgame and every week is a different challenge and a different opportunity. All we talked about this week was ‘Hey, Let’s be 1-0’ and it had nothing that had to do without the games that went before it or anything that’s coming after it so I’m proud of our kids, proud of our coaches and proud of their effort.”

The story of the night was the punishing ground game attack of Hoover’s senior running back duo Marcus Webb and Bradrick Shaw. Webb was named most valuable player after rushing for 153 yards on 22 carries and a touchdown while Shaw carried 19 times for 101 yards and two touchdowns on the night.

“One thing I do want to say is this, these two right here that nobody really writes a whole lot about are the durability of these two,” Niblett said of Webb and Shaw. “When you touch the ball as much as these guys touch the ball and not turn it over and go have all the carries and ball security…to be able to finish games and to be able to get that many carries and be injury free the last two years is second to none and these guys have never missed a game so I’m very proud of that.”

Hoover grabbed the lead early marching 80 yards down the field on the game’s first possession where Hoover Quarterback Jack Hutcheson delivered a seven-yard touchdown pass to wide receiver Quincy Cox to give Hoover the 7-0 lead.

Prattville drove the length of the field on their opening possession but came away with no points as Prattville Quarterback Keith Washington was stuffed by Jeremiah Moon on fourth and goal at the two-yard line.

Hoover lead just 7-0 at the end of the first quarter, but finished the first half strong, scoring 21 points in the second quarter to take a 28-7 halftime lead.

A big play in the game came with just 20 seconds remaining in the first half. Hoover had built a 21-7 lead until Hutcheson tossed a 41-yard touchdown pass to Leonard Wood to extend the Bucs lead to 28-7 going into the half and really stifling the Lions chances of mounting a comeback.

One of the bright spots for Prattville’s offense was the big plays of wide receiver Seth Knotts. Knotts finished the game with five catches for 170 yards and a touchdown.

But in the end, the Bucs offense was just too much to handle as Hoover countered with a six play 61 yard drive capped off by a 20-yard touchdown run by Shaw that gave Hoover a 35-14 lead with 5:10 left in the third quarter.

“We knew that was what their bread and butter was,” Prattville head coach Chad Anderson said about Hoover’s run game, which racked up 244 total yards rushing in the game. “We had some injuries along the way and those things kind of reared their heads in some spots, but we didn’t make the tackles in that first drive with all those penalties that aided it along. It set the momentum and then getting stopped down there on the one-yard line.”

With the win, Hoover tied the all-time series with Prattville 3-3 with all six games being played in the state championship. Hoover now has 11 overall state championships, with nine of them coming since the year 2000.