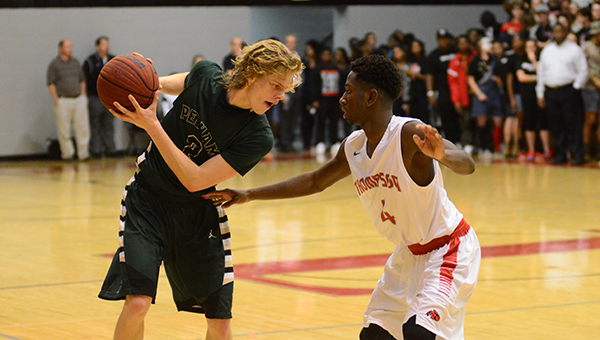 ALABASTER–The Pelham Panthers overcame a sluggish start and hostile environment to defeat the Thompson Warriors 63-57 on Friday, Dec. 5 in an exciting basketball game that went back and forth all night.

Thompson opened the game on a 13-0 run that included six points from Demonte Caffey and seven points from Drew Thomas before Pelham finally got on the board with 3:52 left in the first quarter.

“There’s a lot of excitement when Pelham and Thompson play each other and we just came out a little tense and they knocked some shots down,” Pelham head coach Joel Floyd said about his team’s slow start. “We couldn’t even make a free throw, so once we settled down and started to play our game we felt a lot better going into the half.”

Pelham’s offense started to catch fire in the second quarter behind Zach Allison’s eight points. Allison hit a three-pointer with 4:11 left in the first half to cut the Warrior’s lead to 20-16. Allison finished with 20 points in the game and the Panthers took a 24-23 lead into the half.

The game had all the feelings of a rivalry game as things began to get heated between the two teams in the third quarter.

Allison was hit in the face with the ball as Thompson tried to save it from going out of bounds. A student was also ejected from the game in the Thompson student section, as the game got tighter.

At the end of the third quarter Thompson regained the lead and lead 39-37.

The game’s leading scorer was Alex Reese of Pelham who finished the game with 25 points.

Reese was clutch when it mattered most and had 13 fourth quarter points that included a highlight reel slam-dunk with a few minutes left in the game.

Pelham outscored Thompson 26-18 in the fourth quarter and won the game 63-57 to improve their record to 6-2 on the year. Thompson also fell to 6-2 after the loss.

“It’s really important for us for momentum to always play well against Thompson so it’s just a momentum boost to go to the next level of our remaining games before Christmas,” Floyd said after the game.

Pelham moves on to face Spain Park on Dec. 9, while Thompson will take on Helena on the road on Dec. 9.