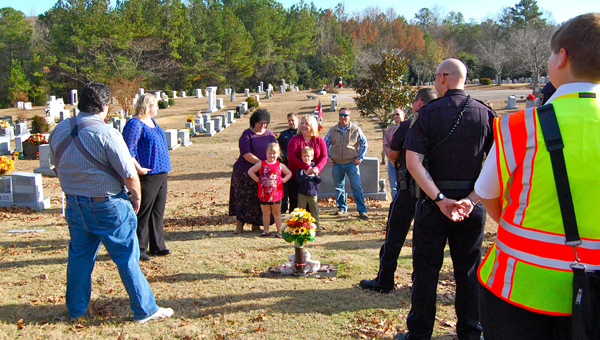 PELHAM—Pelham police officers, Sheriff’s Office deputies, family and friends gathered at Southern Heritage Cemetery on Dec. 7 to remember the life of Pelham police officer Philip Davis, who was killed in the line of duty after a traffic stop on Dec. 3, 2009.

Philip Davis’s family encouraged those gathered to remember his “larger than life” personality and the good memories, rather than his “senseless death.”

“One thing I can take away, and one thing I’ll always have is he was my friend,” Pelham Police Chief Tommy Thomas said.

“Officer Davis was the clown of the department,” Pelham police officer Mike Williams recalled. “Philip always had a lesson behind things he would say… he was larger than life.”

A graduate of the University of Alabama, Philip Davis was passionate about education. Paula Davis said in memory of the fifth anniversary of Philip Davis’s death, she plans start a scholarship fund as part of the Philip Mahan Davis Foundation.

“We help other families when they have a tragedy,” Paula Davis said. “We want to get a scholarship for the University of Alabama. We’re going to start the education side (of the foundation).”

Philip Davis died on Dec. 4, 2009, after being shot shortly before midnight on Dec. 3 during a traffic stop on Interstate 65. His killer, Bart Johnson, was sentenced to death in June 2011, and is currently incarcerated at the Alabama Penitentiary. Philip Davis was the first Pelham police officer to be slain in the line of duty.

In memory of Philip Davis’s career and life, the Pelham Police Department set up a memorial in the lobby of the Police and Courts building on Dec. 3. His memory continues to live on in those he worked with and knew.

“He’s inspired me a lot,” Philip Davis’s nephew, Will Davis, said. “I want to be like him, walk in his footsteps and be a hero like him.”