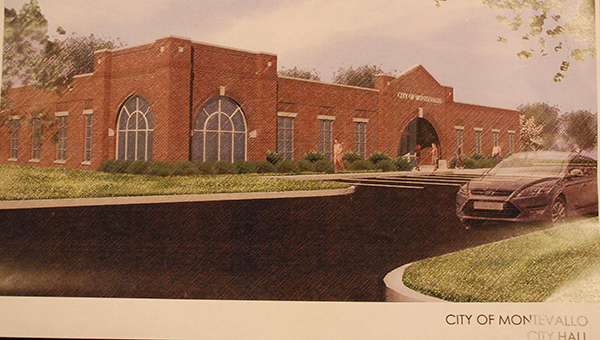 The groundbreaking ceremony for Montevallo’s new city hall will be held on Monday, Dec. 22 at 3:30 p.m. at the site on Main Street. (Reporter Photo/Graham Brooks)

MONTEVALLO–The approval for a new city hall was passed at a Nov. 24 Montevallo City Council meeting and now the groundbreaking ceremony has been set, kicking off the construction of the new city hall and police department building.

The groundbreaking ceremony will be Monday, Dec. 22 at 3:30 p.m. on Main Street at the site of the new city hall.

Montevallo Mayor Hollie Cost added that Williford Orman Construction is planning to move quickly with the project and are aiming to complete the project around 270 days from Dec. 15.

“They feel very confident that they will not only meet that deadline but they will come in under that as long as we don’t have any unforeseen weather events,” said Cost.

At the Nov. 24 City Council meeting, cost discussed the aging and problems with the old city hall building and the importance of getting a new building for the city of Montevallo.

“We feel like this is the face of the city and when businesses want to come to Montevallo and locate here, they come into a city hall that doesn’t look like its been cared for it sends a poor message to the residents,” Cost said of the aging building. “We want to send a better message and I think we’re going to be able to put our best foot forward.”