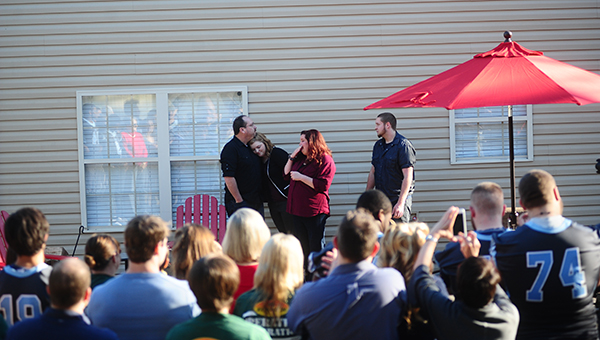 The Sissel family reacts for the first time after seeing their brand new patio before the filming of the commercial was done. (Reporter Photo/Jon Goering)

CALERA–Military families must sacrifice a lot and deal with things an average family might not have to endure such as medical bills, relocation and more.

For the Sissel family, their lives have been made a little easier due to a program called Operation Inspiration.

In 2013, Eckrich Operation Inspiration profiled, honored and surprised deserving military families across the country according to a statement on the Eckrich website.

In August, Heather Sissel, wife of Jason Sissel, saw where the Calera house was available through the Operation Inspiration program and then got the news that her family had been awarded the home in October.

Jason Sissel served in the military in 2003 but was injured and medically separated in October 2005.

Jason had to endure an 11-hour surgery and has dealt with severe post-traumatic stress disorder and other problems ever since.

On Thursday, Dec. 11, Eckrich Sausage Company was at the Sissel’s home in Calera to film a national commercial and award a few more surprises in addition to the home they were given.

The Sissel family was awarded a brand new patio that included a new grill, new sod and lawn furniture.

The Sissel’s were overcome with emotion and they were speechless when they saw what Eckrich and Operation Inspiration had done for them.

“Basically we won the lottery twice in two months,” said Heather. “We have not had good luck with VA (Veterans Affairs) and they awarded us the home, and now the backyard is going to change our family in so many ways. We came back to family, my mom lives here, and friends are here. The home is going to be a place where we can spend the rest of our lives and have our grandkids over.”

The commercial will consist of the Sissel’s reaction to being awarded the patio and a year’s worth of free groceries.

Members of the Calera football team were brought in as extras to make the scene look like a backyard cookout complete with corn hole and food from Eckrich.

The commercial will air nationally on Dec. 20.

Teachers learn to code at VIS