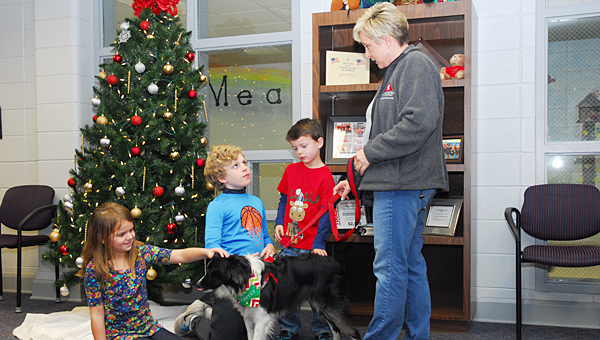 ALABASTER – When Meadow View Elementary School student Aubree Dotson heard about the grand prize for the school’s “Learning Earnings” program, she set the goal in her mind.

“This is why I have been saving up,” Dotson said as she and two of her classmates spent time playing with Warrior, the Alabaster City School System’s canine mascot, on Dec. 12. “I’ve paid attention in class and kept my grades up.”

Dotson, her classmate Alex Galloway and kindergartener Morgan Carden reached the top prize in the Learning Earnings program in only one semester by recording good deeds such as getting to school on time, obeying their teachers and being nice to others.

MVES joined other Alabaster schools this year in rolling out the Learning Earning program, for which Alabaster was selected as a pilot through the state Department of Education’s Plan 20/20.

Through the program, which comes with no cost to ACS, the state provides a system through the school system’s existing iNow software allowing teachers to track students’ good deeds. Each time a student is honored for a good deed, they collect credits through, which they can spend on prizes offered at each school.

At Meadow View, prizes available to the children included eating lunch with a teacher or principal, making the afternoon announcements, being an office assistant for 15 minutes, visiting a past teacher and helping them with their class and the grand prize: A picture and time with Warrior.

After Warrior entered the school, the three students greeted him in the MVES front office and had their photos made with him in front of the school’s Christmas tree. The kids spoke to Warrior’s handler, Windy McNish, about their own dogs while they pet the Australian shepherd ACS mascot.

“It’s something that ACS has implemented in all of its classrooms,” MVES Principal Rachea Simms said, noting she was planning to eat lunch with a student in the coming days as part of the program. “I give all the credit to (MVES Assistant Principal) Taylar Posey for getting this program going here.”