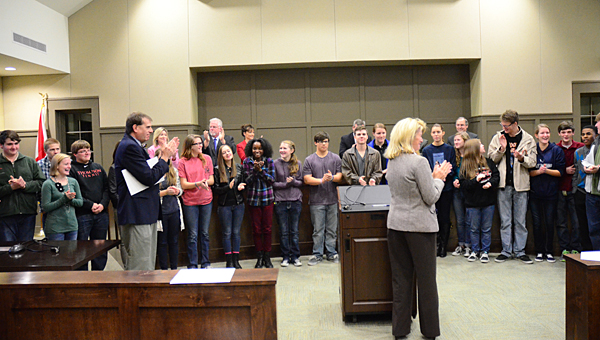 ALABASTER – The Thompson High School wind ensemble won’t have to fundraise to pay for transportation to a prestigious concert band festival in March after the city’s Board of Education agreed to foot the bill during a Dec. 12 meeting.

The School Board voted unanimously during the meeting to pay $12,900 to cover transportation costs for the band to attend the National Concert Band Festival in Indianapolis from March 12-14.

Alabaster School Superintendent Dr. Wayne Vickers said with the school system paying for transportation, the band will be able to turn their attention to preparing to perform at the festival.

“I recommend the approval of this expense for them to have that trip,” Vickers told board members before they voted on the matter. “This way, they won’t have to fundraise for travel, and can focus on other matters.”

The wind ensemble is one of only 15 high school bands from across the nation to receive an invitation to perform at the festival, and THS Director of Bands Jon Bubbett called it “the biggest and most prestigious event of its kind in the nation.”

Though the city’s School Board is paying for transportation costs to the festival, the band is still working to raise money to send all of its members to the event.

The band’s selection to perform in the festival earned the wind ensemble a proclamation from Alabaster Mayor Marty Handlon during the Dec. 8 Alabaster City Council meeting, during which nearly every member of the band was present.

Attending the festival will come with an about $675 cost per student, which will cover festival fees, housing, transportation and meals for the four-date event. Because of the cost associated with the trip, some families have reached out to the band for financial assistance.

Bubbett previously said the band is looking to help between eight and 10 students with the cost of attending the trip.

No damage after fire outside Alabaster City Hall