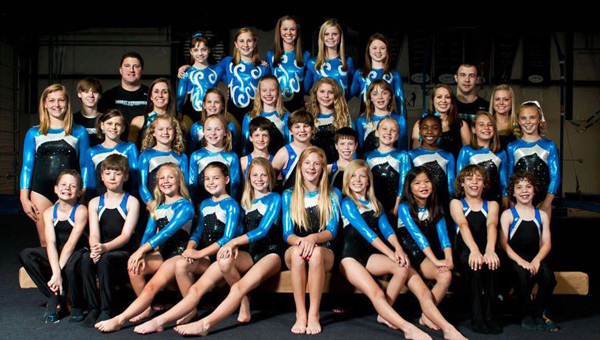 Legacy Gymnastics in Pelham trains both boys’ and girls’ competitive teams. Members of the girls’ levels 3, 4 and 5 teams competed in the state meet Dec. 5-7. (Contributed)

Twenty gymnasts from Legacy Gymnastics, levels 3, 4 and 5, traveled to Mobile to compete against gymnasts from across the state at the tournament hosted by Planet Gymnastics at the Arthur R. Outlaw Convention Center.

The girls overcame pre-competition jitters and performed very well at the state competition.

“We had 20 that competed total, and we had five that won first place all around,” coach Brianna Mitchell said.

“They were bouncing off the walls, literally,” Brandy Martin, Casey Martin’s mother, said of the girl’s excitement after the competition. “Going somewhere with a gymnast is always different, they’re always looking for a chance to turn a cartwheel or a back handspring.”

Many of Legacy Gymnastics’ other gymnasts placed among the top both in all around and on individual events, Mitchell said.

The Legacy Gymnastics level 3 placed fourth out of 13 teams, and the level 4 team placed second out of 14 teams.

“They’re excited,” Mitchell said of the gymnasts, noting “over half of them” will be moving up to the next level.

Coached by Mitchell along with Sarah Griggs, Bethany Buchanan, Steven Mitchell and C.J. Laird, the girls who competed are dedicated gymnasts, many of them practicing “anywhere from three to five days a week,” Mitchell said.

Legacy Gymnastics is located at 188 Chandalar Place Drive. The gym trains both boys’ and girls’ competitive teams. More information can be found at Legacygymnastics.com.

XTERRA returning to OMSP May 16